The new coronavirus that’s forcing lockdowns and roiling economies is spurring a silent revolution in the field of telemedicine.

As COVID-19 spreads across Europe, leaving new patients in its wake, the fear of infection and a saturated health-care system are driving large numbers of people online for medical consultations. Startups like General Atlantic-backed Doctolib and insurer AXA SA-supported Qare in France, Swedish Kry International AB’s unit Livi, the UK’s Push Doctor and Germany’s Compugroup Medical SE that offer up virtual doctors are raking it in.

“It’s unfortunate, but the current epidemic is pushing patients to make the leap, and it can accelerate a change in habits,” said Olivier Thierry, chief executive officer of Qare, a French platform that offers video consultations with its team of doctors. “Forecasts on growth are changing by the day.”

The business of connecting doctors and patients through video consultations has had a slow start in Europe because of patient reticence, an unfriendly regulatory environment, disparities in health-care systems and insurance rules. Now, with hospitals struggling to cope with the virus, patients are turning to such services and governments are setting aside reservations about the risks of “couch consultations” to ease regulations.

The European Commission in 2018 estimated that the global telemedicine market would reach 37 billion euros ($42 billion) by 2021, with an annual growth rate of 14%. Those numbers may now be surpassed as virus concerns boost demand, making such consultations more routine and widely accepted.

Qare’s CEO sees telemedicine representing about 10% of France’s 400 million annual medical consultations by the end of 2021 from negligible numbers now. Qare, which takes a 20% fee for consultations, said that in the past couple of weeks it added 25% more bookings than usual. Last year, it had 80,000 appointments, up from 8,000 in its first full year of operation in 2018.

For Sweden’s Kry, consultations for virus-related infections — like colds, flu, cough and fever — and other general demands has jumped 41% week-on-week in markets outside its home base, Johannes Schildt, its co-founder said. The startup, which raised 140 million euros in January from the Ontario Teachers’ Pension Plan, also operates in Norway, the U.K., Germany and France.

The jump came “as health-care systems in our core markets struggle to cope with the Coronavirus-related strain,” he said. 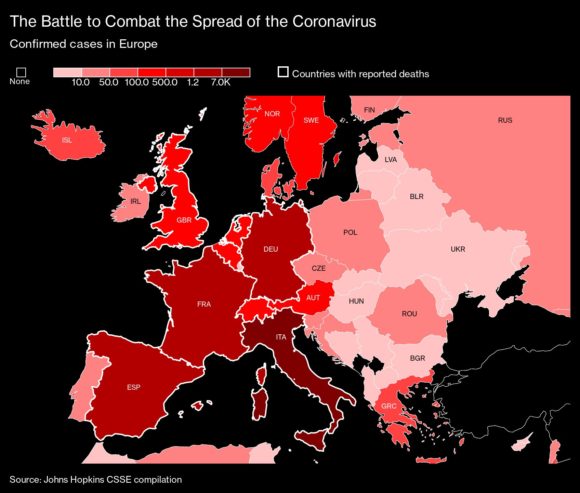 Doctolib, the top French startup helping set up medical appointments, says it saw a 40% increase in bookings last week. It clocked up 130,000 video consultations in its first year in that business last year.

The startups that manage to broaden their customer base during the virus crisis will find themselves in an increasingly crowded race.

In France alone, the market is spread between Qare, Livi, Mesdocteurs, HelloConsult, Medaviz, Hellocare, DoctoConsult and Doctolib. In the U.K. the business is shared by Babylon Health, which got funding from Saudi Arabia’s Public Investment Fund, Push Doctor, askmyGP and Livi.

The current epidemic will show which players are “equipped, scaled and have the ability to face the crisis,” said Wais Shaifta, the CEO of Push Doctor, whose backers include Partech and Draper Venture Network. The U.K. company, which works with the NHS, has added 20% more consultations since the start of the year, with a bump since last week. Shaifta expects the virus to push numbers even higher.

Telemedicine includes consultations not only with general practitioners but also in specialized areas such mental health, cardiology, dermatology and others, depending on local regulations. Dutch startup Ksyos has invested in the business in the Netherlands, Italy and Austria, and helps patients with long-term ailments to consult doctors on a regular basis.

For all its growth, though, telemedicine is not without its detractors.

In April, PWC cited an American pediatric doctors’ analysis report, that “telemedicine may benefit patients by making care more convenient and accessible, but new data suggests it may also contribute to the over-prescribing of antibiotics by physicians who aren’t able to physically examine their patients.”

“Health care is a serious thing and reliable treatments cannot be traded for the comfort of consultations from a couch,” said Jean-Paul Hamon of the French doctors’ federation. “Telemedicine must be used with more judgment and authorities must make sure it’s not spreading into a business.” He said the coronavirus shouldn’t be “the excuse” to market telemedicine.

At the December congress of the industry group called Telemedicine Society, Nicolas Revel, who heads France’s state health-insurance system, said he wasn’t comfortable with the rise of “patient-consumers.”

Countries like Switzerland and Estonia have long used the system, initially with telephone consultations. Switzerland is starting to test video medicine with connected self-measurement devices that patients can use in their homes.

In the Netherlands, the government says people who want “care and support at home should be able to communicate with their care provider 24 hours a day via a screen.” A startup called BeterDichtbij, better-closer in Dutch, offers a Whatsapp-type consultation with doctors.

In Germany, the state has started relaxing rules on remote treatment, but the national culture around privacy and data protection remains a barriers. Doctolib, which entered the market with its appointment-booking offer, has yet to try telehealth in Europe’s biggest market, while Kry’s Livi is starting to make inroads.

Governments have been cautious about the spread of the practice, putting the brakes mainly through what they’re willing to reimburse and what is covered by health insurance. The French state, for instance, has been concerned about what it sees as the emergence of a parallel “private health-care” system.

“It’s not about our growth, but the government has put limits that don’t allow people to access telemedicine in some remote areas,” said Qare’s Thierry, calling such regulations a “straitjacket.”

The coronavirus may be changing that.