Trade talks between the EU and UK have struggled in recent weeks, increasing the prospect that Britain departs the bloc without a deal and that businesses face an extreme shock when the divorce takes effect.

It’s a scenario that would deepen the economic pain inflicted by the coronavirus pandemic, with companies already reeling from the damage of the national lockdown and the economy heading for its deepest recession in centuries. Unemployment has surged and Prime Minister Boris Johnson is caught between trying to revive businesses while avoiding a deadly second spike of the disease.

All the while, negotiations with the EU for a comprehensive economic agreement to replace the UK’s decades-long membership of the bloc have stalled badly, with both sides unwilling to budge on fundamental issues. The stand off pushes both parties toward a no-deal Brexit that would create a serious strain for companies.

“For businesses, jobs and economic confidence in this most challenging of years, this would be a shocking outcome,” said Carolyn Fairbairn, director-general of the Confederation of British Industry. “For many firms fighting to keep their heads above water through the crisis, the idea of preparing for a chaotic change in EU trading relations in seven months is beyond them.”

The impasse in the UK-EU trade talks comes down to a basic disagreement. In exchange for a zero-tariff, zero-quota deal, the EU wants the UK to sign up to provisions that would prevent Britain from undercutting it in areas like environmental and labor regulation, and state aid — the so-called level playing field. Downing Street refuses, seeing the demand as inconsistent with the principle of sovereignty that was core to the Brexit vote.

If sufficient progress in the talks isn’t made this month, the UK says it will break off negotiations and tell businesses to prepare for a no-deal split. Johnson has repeatedly categorically ruled out delaying the final stage of Brexit beyond the end of 2020.

Here’s what that no-deal outcome would mean for business in Britain:

Japanese carmaker Nissan Motor Co., which employs 6,000 people at a plant in the Brexit-supporting town of Sunderland, has said its factory wouldn’t be sustainable because car exports to the bloc would face a tariff of 10%.

“The Brexit issue does hang like a pall over the industry,” said Mike Hawes, chief executive officer of the Society of Motor Manufacturers and Traders. “When you’re in a high-volume, low-margin business, the 10% tariff removes any chance of competitiveness.” 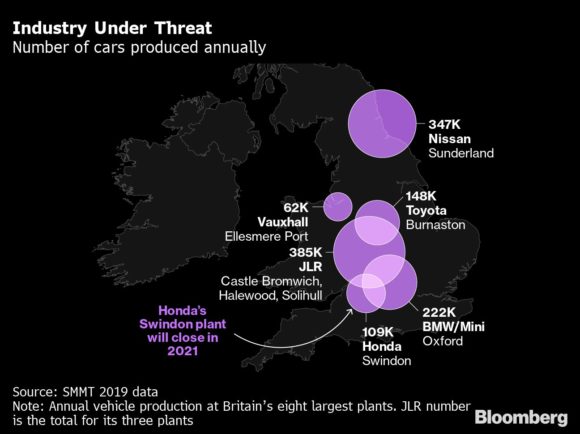 Industrial heavyweights like German automaker BMW AG, which has a plant in Oxford, and aviation giant Airbus SE, which employs 13,500 people in the UK and makes plane wings in Wales, also face the prospect of border disruption snarling up their highly-efficient, just-in-time production lines. Trucks arriving at the UK-EU border without the correct paperwork will be stopped, risking lengthy queues and halting factories. Moreover, Britain has an acute shortage of customs agents to keep trade flowing.

“Airbus remains concerned by the potential for a ‘no-deal’ in December 2020,” said spokesman Ian Middleton. “The shape of the future EU/UK relationship remains of critical importance for Airbus and its employees.”

Another problem is an increased regulatory burden. Without a trade deal that deems UK and EU product standards equivalent, manufacturers in Britain would need to seek approval from both British and European regulatory bodies if they wish to sell their product in both markets. They may also have to set up separate production lines if they need to produce a good to two different regulatory standards.

Grocers like Tesco Plc, Wm Morrison Supermarkets Plc and J Sainsbury Plc would face a range of price increases: about 80% of food imported by supermarkets in the UK comes from the EU, according to the British Retail Consortium, and much of this would become subject to tariffs. For example, olives, mushrooms and satsumas would face a 16% levy, and some European wines would have a tariff of 17 pounds ($21) for every 100 liters.

There would also be higher costs due to new non-tariff barriers which will apply whether there is a UK-EU trade deal or not. Outside the EU’s customs union, traders in the UK will need to file customs declarations, which cost between 16 pounds and 56 pounds per product line, according to the BRC. Given retailers operate on slim margins, higher costs are likely to be passed on to consumers, the lobby group said.

“The government’s priority for the food supply chain now should be to ensure a trade deal with the EU by 2021,” Victoria Durman, a spokesperson for Sainsbury’s, said in a statement. “We have detailed plans in place to keep stores operating normally and shelves full, whatever the Brexit outcome.”

The UK’s farming industry sends about two-thirds of its exports to the EU, which would be subject to steep tariffs under a no-deal Brexit. They would be in excess of 40% for cuts of beef and lamb, and 15% for pork, making British produce less attractive for EU buyers and flooding the UK domestic market with the surplus.

“A no-deal will be devastating,” said Ellie Phipps, policy officer at the National Sheep Association. “We need an export market.” 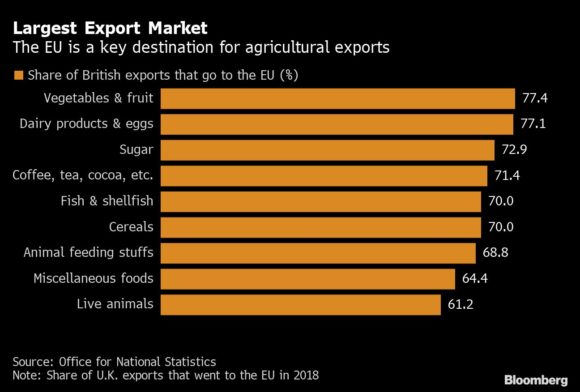 On top of that, farmers will also face new, non-tariff barriers, regardless of whether a trade deal is signed. These include export health certificates, a form costing 100 pounds that’s required to export products of animal origin into the EU.

These obstacles “will cause delays which are very undesirable for perishable products,” said Peter Hardwick, trade policy adviser at the British Meat Processors Association. They will also “take away some of the key competitive advantages the UK currently enjoys in its trade with the EU,” he said.

Services make up 80% of the UK economy — comprising a breadth of activities including IT, law, accountancy, insurance, consulting, architecture and hairdressing — and Brexit will hurt the ability of British firms to do business in the EU, its largest export market for services.

For example, without an agreement, professional qualifications in regulated industries like law and architecture wouldn’t be recognized, meaning UK nationals wouldn’t be able to provide that service in an EU member state unless they had been authorized to do so. 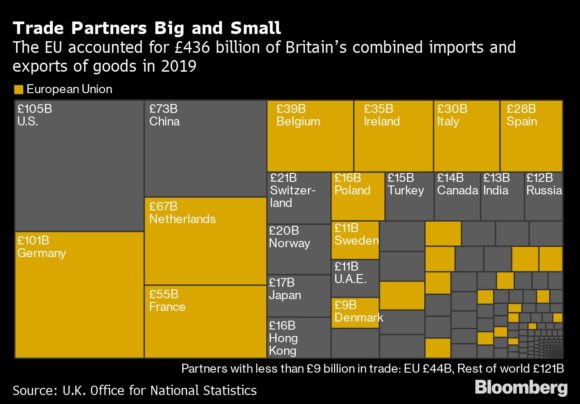 The end of free movement of people between the UK and EU without any further agreement will also be costly, potentially requiring companies to pay for visas for business travel. That could hurt Britain’s ability to bring in workers to plug shortages in its labor market, particularly in the National Health Service, agriculture and hospitality.

“The real trouble will come for smaller services providers,” said Anand Menon, director of the UK in a Changing Europe, a think tank that studies UK-EU relations. “If you’re a massive bank, you’ve got the resources to prepare and make contingency plans to set up a subsidiary inside the EU. If you’re a small firm, you might not have the resources to do that.”

Ever since the Brexit referendum in 2016, global banks such as HSBC Holdings Plc and JPMorgan Chase & Co. have planned for the possibility of losing access to the EU’s single market. It’s meant major financial institutions have set up offices and moved staff to cities like Frankfurt, Paris, Dublin and elsewhere in the bloc to ensure no disruption to operations.

Still, they’re pressing for the EU and UK to allow as many trades and business as possible to remain in Britain. Those so-called equivalence decisions for trading desks, markets and trillions of dollars worth of derivatives have yet to be reached. Without them, more jobs and capital could flow to the continent.

If equivalence isn’t granted, “it divides the world into an increasing number of regions at a time where banks want to have liquidity and capital available to deploy where they need it around the world,” said Peter Bevan, a financial regulation partner at law firm Linklaters in London. “It brings the need for operational change, the expense of building out your European legal vehicles.”

For pharmaceutical giants such as AstraZeneca Plc and GlaxoSmithKline Plc, a key Brexit concern is regulation. The UK is hoping for some form of mutual recognition of testing when it comes to drugs and devices, but discussions with the EU so far have made little progress on this front.

“The most likely scenario today is that there is not full regulatory alignment,” said Hugo Fry, managing director of French drugmaker Sanofi’s UK business. The bigger issue now is making sure trade routes are uninterrupted so companies don’t have to stockpile unendingly, he said.

The other major concern is whether the UK will become less attractive to scientists and investors in the sector. Industry groups have been lobbying hard for Britain to remain a participant in programs like Horizon 2020, which provides funding for research and innovation.

The UK imports about 10% of its power from continental Europe. After Brexit, British electricity systems will be decoupled from the European Internal Energy Market, but that doesn’t mean gas and power will stop flowing. However, trading could become less efficient and longer-term supply less certain, increasing costs for consumers. This would be especially true in times of unplanned supply interruptions or extreme weather.

Businesses trading with and within Northern Ireland would face added headaches from a no-deal Brexit. Tariffs would be payable on goods crossing from the rest of the UK to Northern Ireland, to be reclaimed later through a rebate system if the product remained in Northern Ireland and didn’t cross the border into the Republic of Ireland, which is in the EU. 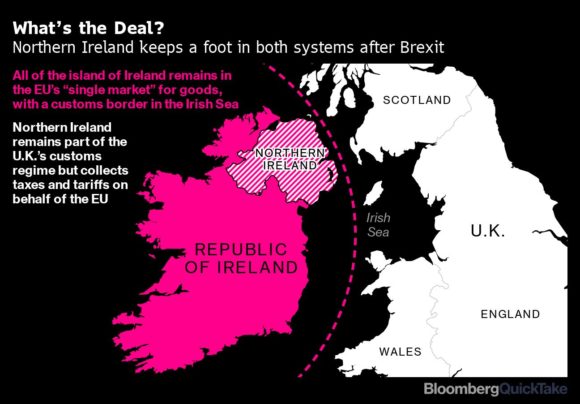 Products of animal origin crossing from elsewhere in the UK to Northern Ireland — such as a beef lasagna or chicken pie — would require export health certificates and would be subject to health inspections at ports like Belfast and Larne. Goods trucks taking food to supermarkets regularly carry hundreds of product lines that would be hit by the new red tape, a potentially existential threat for some operations, said Aodhan Connolly, director of the Northern Ireland Retail Consortium.

“It is a make-or-break issue for Northern Ireland retailers,” he said. “‘We’re looking at business models becoming unviable.”