Zeta will move into the Gulf of Mexico in the next few hours after making landfall on the Yucatan Peninsula, then regain strength as it heads north toward Louisiana and likely comes ashore Wednesday.

Now a tropical storm again, Zeta’s winds fell to 70 miles (113 kilometers) per hour as it edged closer to the Gulf’s warm waters. It may build to at least 85 mph in the next 24 hours, the U.S. National Hurricane Center said in its forecast, making it a Category 1 hurricane capable of ripping shingles off roofs, tearing branches off trees and downing power lines.

“Hurricane conditions and life-threatening storm surge are expected along portions of the northern Gulf Coast by late Wednesday,” said Dan Brown, a hurricane center meteorologist. “Between tonight and Thursday, heavy rainfall is expected from portions of the central U.S. Gulf Coast into the southern Appalachians, and mid-Atlantic states near.”

After it makes landfall in the U.S., Zeta is forecast to continue north, where it may join a winter storm over the Great Plains and dump flooding rains across the eastern U.S. through the rest of the week. 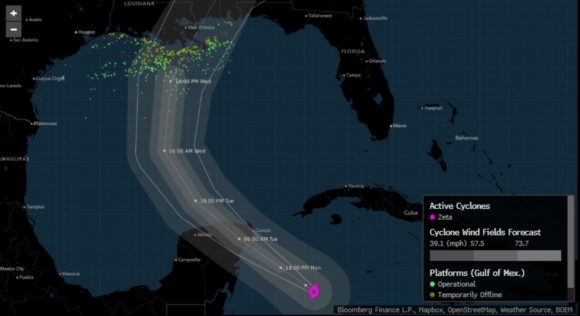 Zeta is the 27th named storm in a supercharged Atlantic hurricane season, just one short of the record reached in 2005, when Hurricane Katrina devastated New Orleans. So many storms have formed this year that the hurricane center has run out of official names and is using Greek letters to designate systems.

Chevron Corp. and BHP Group are already pulling non-essential personnel off oil and gas platforms in the Gulf. Noble Corp. moved its Globetrotter II rig out of the way, while Equinor ASA plans to shut production at its Titan platform. Nearly 16% of oil production and 6% of natural gas has been shut in across the Gulf, according to the Bureau of Safety and Environmental Enforcement.

Landfall will be likely be south of Morgan City, Louisiana, late Wednesday, said Mike Doll, a meteorologist with AccuWeather Inc. Winds and heavy rain will likely reach as far east as New Orleans, delivering a storm surge in Lake Pontchartrain of about 12 inches (30 centimeters).

A storm surge, which happens when a system pushes the ocean higher as it comes ashore, may wash over coastal areas from Louisiana to the Florida Panhandle. Hurricane-strength winds may affect a smaller area from Morgan City to the Alabama-Mississippi state line, the center said.

Vast stretches of the eastern U.S. will be hit with heavy rain, and the U.S. Weather Prediction Center warned that as much as 5 to 7 inches may fall over the next five days.

As Zeta comes ashore and moves across Mississippi, Alabama, and northern Georgia, it will interact with a winter storm that’s brought snow to Texas and is now also be moving east, Doll said. The two storms will dump heavy rain from Oklahoma to New York City, and by then it won’t matter which one is responsible for wringing water out of the sky.

“Rain drops don’t have names on them,” Doll said.

The U.S. has been particularly hard hit this year, with Hurricanes Isaias, Laura, Hanna, Sally and Delta all hammering the coastline and causing billions of dollars in damage. A handful of tropical storms have struck the U.S. as well. Zeta would be the record 11th storm to come ashore in the contiguous U.S. this year, and if it makes landfall in Louisiana, it will be the fifth time the state has been hit this season.

A typical Atlantic hurricane season only spins up 12 storms. The six-month season theoretically ends on Nov. 30, but a number of storms formed before its official start date of June 1 this year, and some meteorologists think they could keep coming into December.

Environmental indications point to the potential for a few more storms to develop in the Atlantic during November, which would push 2020 over the 2005 record, said Jim Rouiller, lead meteorologist at the Energy Weather Group.

“It is not over,” Rouiller said. “Zeta is not going to be the end.”

Photograph of trees bending in the wind during a hurricane, taken by Richard Sheinwald/Bloomberg.