European freight forwarders are rejecting contracts to take loads into the UK due to fears the chaos at Dover could be repeated post-Brexit.

Transporeon, a German software company that monitors real-time data on freight traffic and rates for more than 100,000 logistics service providers, said a “dramatic number” of freight forwarders had declined to take cargo into the UK in the past fortnight, despite having already agreed contracts.

That’s because the companies — which receive and ship goods on behalf of other firms — are concerned they won’t be able to return with a so-called backload or that they could be stuck in queues when trying to leave Britain. 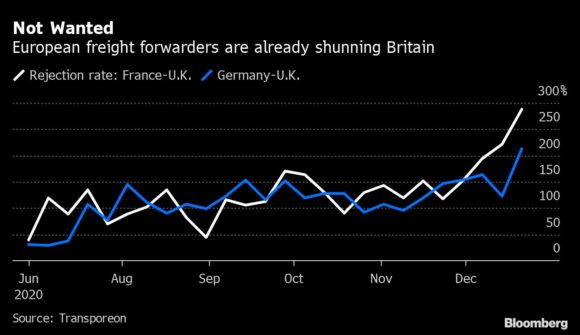 The rejection rate for cargo from France to Britain almost tripled last week — compared to the third-quarter average — and doubled for the Germany-Britain route as demand for transport fell 68% for France-Britain and 71% for Germany-Britain.

Freight forwarders are typically less busy around Christmas — when drivers take vacation and businesses shut — and the drop was expected to be more pronounced this year after businesses stockpiled spare parts, food and production materials in the third quarter. Still, Oliver Kahrs of Transporeon said these factors alone could not explain the decline in demand.

“When trucks were stuck not able to cross the channel, that was an extraordinary situation which is not comparable to what we had last year,” he said. Kahrs attributed the higher rejection rates to the chaos at Dover last week and also mentioned worries that there could be more logjams after the UK leaves the single market and customs union on Thursday.

The UK government is still dealing with the Kent turmoil, which was triggered by France blocking cross-channel traffic for 48 hours to reduce the spread of COVID-19.

In a letter on Tuesday, trade group Logistics U.K. warned the dearth of adequate toilet facilities or hot food at the Port of Dover during the blockade was a “national embarrassment,” adding that if the chaos is repeated on Jan. 1, “this lack of concern for driver welfare could impact on the willingness of EU hauliers to send their drivers to this country.”

Photograph: Trucks and vehicles in stationary traffic on the access road towards the Port of Dover Ltd. in Dover, U.K., on Wednesday, Dec. 23, 2020. Routes to Dover, Britain’s busiest cross-channel port, have been choked for days after France shut its border with Britain, blaming an outbreak of a novel strain of the coronavirus. Photographer: Chris Ratcliffe/Bloomberg