Another year of record-high heat punctuated a decade-long increase in global temperatures that has placed the Earth’s economies dangerously close to climate tipping points.

Those are the conclusions published Friday by European Union scientists. Despite pandemic-induced lockdowns of the global economy in 2020, greenhouse gas emissions continued to accumulate in the atmosphere, propelling the world closer to crossing the 1.5 degree Celsius warming threshold that climate models predict will lead to more frequent superstorms and higher sea levels.

“The last decade was the warmest on record, and is yet another reminder of the urgency of ambitious emissions reductions to prevent adverse climate impacts in the future,” said Carlo Buontempo, director of the Copernicus Climate Chance Service. “2020 stands out for its exceptional warmth in the Arctic and a record number of tropical storms in the North Atlantic.”

Storms, fires and floods killed at least 8,200 people and cost the world $210 billion in insured losses in 2020, according to a report published Thursday by Munich Re. Six of the most expensive disasters happened in the U.S., including a destructive derecho in the Midwest, a record number of tropical storms and hurricanes strikes, and an all-time high acreage burn in California.

The Copernicus models combine data from scientists in the UK, France, Germany, Italy and the U.S. The agency, which uses billions of measurements from satellites, ships, aircraft and weather stations around the world for its monthly and seasonal forecasts, concluded that 2020 matched 2016 as the world’s hottest on record.

Global temperatures are now just 0.25 degrees Celsius shy of limits set by the Paris climate accord.

The regions of the globe that experienced the most severe climate change were parts of the Arctic and northern Siberia, where temperatures in some regions were more than 6 degrees Celsius higher than average. High temperatures in Siberia threaten to unlock methane deposits from melting permafrost, potentially unleashing runaway climate reactions prompted by higher greenhouse gas concentrations in the atmosphere.

“This is no cause for complacency,” Peuch said. “Until the net global emissions reduce to zero, CO2 will continue to accumulate in the atmosphere and drive further climate change.” 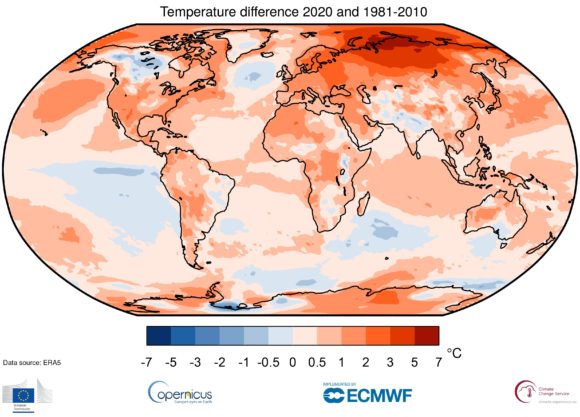 Top photograph: A firefighter monitors a controlled burn while fighting the Dolan Fire near Jolon, Calif., on Wednesday, Sept. 16, 2020.