Uber Technologies Inc.’s defeat in a UK legal battle over the way it treats its drivers is set to trigger a wave of complaints from workers across the region.

Britain’s Supreme Court ruled Friday that Uber must treat its drivers as “workers,” giving them access to vacation pay, rest breaks and minimum wage while they’re using the app. The ruling applies to the handful of people who brought the case in 2016. Jamie Heywood, regional general manager for Northern and Eastern Europe, said Friday Uber has made “significant changes” since then.

The decision nevertheless opens the way for additional claims — and not just from Uber drivers. Those making deliveries for companies like Amazon.com Inc., which uses third-party services that employ freelance workers, as well as other, smaller players, now have a clearer path for challenging the terms of working for their platforms, said Mick Rix, a national officer for the GMB union. The GMB, which has more than 620,000 members, will use the decision to take on other tech platforms, he said.

“It wasn’t just about Uber, it was about the gig economy,” Rix said. “It’s a bogus, false model of employment, and it’s wrong and people are being exploited.”

With its booming tech scene, the UK is one of the most important markets in the region for platforms that connect independent workers with jobs, from ride-hailing to food delivery to other freelance work. It’s San Francisco-based Uber’s biggest European market.

“Any business with a gig economy model should take heed today,” said Michelle Hobbs, employment law expert at Stevens & Bolton. “This landmark ruling undoubtedly revs up the pressure on gig-economy businesses to provide much better terms and conditions to those working for them.”

These platform workers are generally employed as independent contractors, allowed to set their own hours and choose which jobs they take. But criticism has grown as these people become a larger part of the workforce.

The COVID-19 pandemic turned couriers into essential, front-line workers, putting them at risk of exposure to the disease and piling pressure on tech companies to ensure they have benefits like insurance or sick pay if they have to stop working. 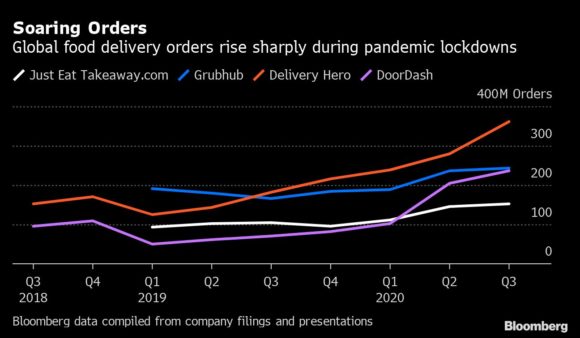 Representatives for Amazon didn’t immediately respond to requests for comment.

European Union policy makers are expected to publish recommendations for improving working conditions later this month. In Spain, the government is preparing labor law changes that could mean food-delivery platforms have to formally employ couriers. A French court said last year that the relationship between Uber and a driver constitutes an employment contract.

Some tech-oriented food deliverers have taken a different approach. The Chief Executive Officer of Just Eat Takeaway.com NV, a Dutch competitor to Uber’s food-delivery service in Europe, said in a post on his Twitter page on Friday that the ruling is “pretty much the end of the gig economy in Europe.” The company pays its drivers hourly wages and other benefits as part of its Scoober service, while its much more profitable marketplace service lets restaurants deliver the food themselves.

In a letter to Financial Times editors published Friday, Jitse Groen [of Just Eat Takeaway] said platforms’ use of independent contractors “has led to precarious working conditions across Europe, the worst seen in a hundred years.” He called on policymakers to implement rules that would define all food-delivery workers as staff.

And there goes the UK. Taxi drivers are not freelancers. With Spanish and Dutch courts concluding similarly in the past week this is pretty much the end of the gig economy in Europe.
— Jitse Groen (@jitsegroen) February 19, 2021

However, the outcome for many companies that rely on these workers will hang on the details. The UK law distinguishes between employees, which are entitled to all statutory employment rights such as redundancy payment, and workers, which are eligible for minimum wage and holiday pay but not for the full range of benefits.

Strict labor laws will “severely limit flexibility” and could ultimately be a bad thing for couriers, said Sacha Michaud, co-founder of Spanish delivery app Glovo. “It goes without saying that it will also have a negative impact on our operations, stifling our geographical expansion to smaller towns and cities, and the impact of that will be felt by local, independent SMEs that aren’t able to offer their own delivery services.”

Top photograph: A commuter uses the Uber Technologies Inc. app on a smartphone in view of a line of black cabs waiting to pick up passengers in this arranged photograph in London, UK, on Monday, Nov. 25, 2019. Photo credit: Jason Alden/Bloomberg.