The deal values London-based Aviva’s Polish business at 2.7 billion euros, according to a statement from Aviva Friday. It’s subject to regulatory approval and is expected to complete within 12 months.

The sale completes Aviva Chief Executive Officer Amanda Blanc’s plan to boost the London-listed insurer’s struggling share price by offloading non-core assets. Blanc has wasted little time since taking the helm in July, agreeing to sell a majority stake in its Singapore business for about $2 billion and pushing ahead with the disposal of units in Italy, France and now Poland.

“The sale of our eight non-core businesses will generate total cash proceeds of 7.5 billion euros,” Blanc said in the statement. “We have made significant progress with our debt reduction plan and in due course we will make a substantial return of capital to shareholders.”

The deal makes Allianz the fifth largest insurer in Poland, the German firm said in a separate statement. Aviva’s Polish business consists mainly of life insurance and pensions, and also has a non-life unit and a distribution agreement with ING Groep NV and Banco Santander SA. 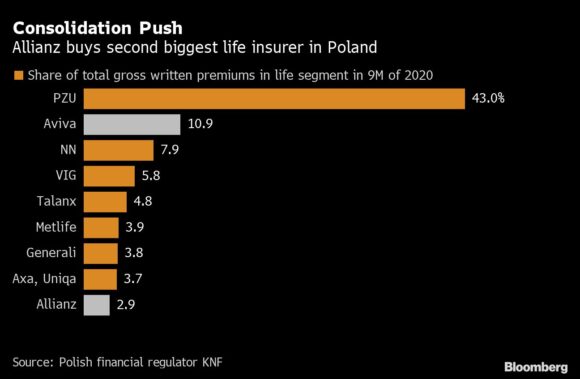 The all-cash sale to Allianz followed a bidding war with Dutch insurer NN Group NV and Italy’s Assicurazioni Generali SpA, Bloomberg reported Thursday. The German insurer offered more deal certainty because of a lower risk of antitrust objections in Poland, according to a person familiar with the matter.

The pandemic has handed Allianz the first annual drop in profit in nine years and forced it to abandon a buyback program. Chief Executive Officer Oliver Baete has vowed to restore profit growth this year, negotiating a number of smaller deals in the last few months.

Photograph: A pedestrian passes a sign outside the headquarters of Aviva Plc in London, U.K., on Friday, March 7, 2014. Photo credit: Matthew Lloyd/Bloomberg.