A population equivalent to that of Germany — 83 million people — could be killed by 2100 because of rising temperatures caused by greenhouse-gas emissions, according to a new study that might influence how markets price carbon pollution.

The research from Columbia University’s Earth Institute introduces a new metric to help companies and governments assess damages wrought by climate change this century. Accounting for the “mortality cost of carbon” could give polluters new reasons to clean up by dramatically raising the cost of emissions.

“Based on the decisions made by individuals, businesses or governments, this tells you how many lives will be lost or saved,” said Columbia’s Daniel Bressler, whose research was published Thursday in the journal Nature Communications. “It quantifies the mortality impact of those decisions” by reducing questions down “to a more personal, understandable level.”

Adapting models developed by Yale climate economist and Nobel Prize winner William Nordhaus, Bressler calculated the number of direct heat deaths that will be caused by current global-warming trajectories. His calculations don’t include the number of people who might die from rising seas, superstorms, crop failures or changing disease patterns affected by atmospheric warming. That means that the projected deaths — which approximate the number of people killed in World War II — could still be a “vast underestimate,” Bressler said. 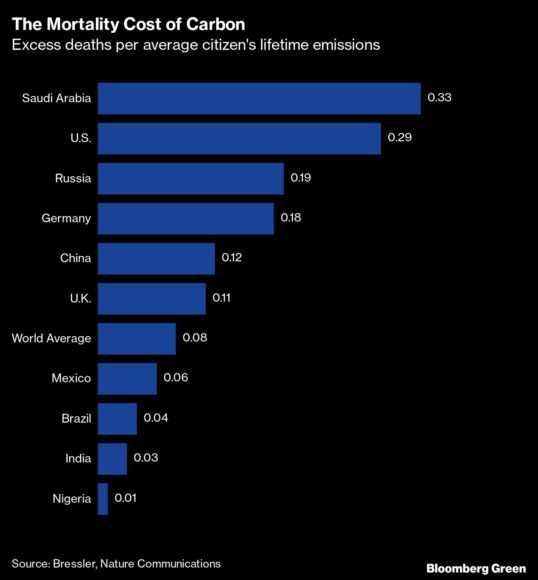 Every 4,434 tons of carbon spewed into the Earth’s atmosphere in 2020 will kill one person this century, according to the peer-reviewed calculations that see the planet warming 4.1º Celsius by 2100. So far the planet has warmed about 1.1º C, compared to pre-industrial times.

The volume of pollution emitted over the lifetime of three average U.S. residents is estimated to contribute to the death of another person. Bressler said the highest mortality rates can be expected in Earth’s hottest and poorest regions in Africa, the Middle East and South Asia.

The new metric could significantly affect how economies calculate the so-called social cost of carbon, which U.S. President Joe Biden’s administration set at $51 a ton in February. That price on pollution, which complements carbon markets like the European Union’s Emissions Trading System, helps governments set policy by accounting for future damages. But the scale revealed by Bressler’s research suggests the social cost of carbon should be significantly higher, at about $258 a ton, if the world’s economies want to reduce deaths caused by global warming.

A higher cost on carbon pollution could immediately induce larger emission cuts, which in turn could save lives. Capping global average temperature increase to 2.4ºC by the end of the century, compared with modest emissions reductions that would warm the planet 3.4ºC, could save 74 million people from dying of heat.