The banker tasked with fixing Credit Suisse Group AG was ousted just nine months into the job for breaching COVID quarantine rules, throwing the Swiss financial giant into fresh turmoil as it struggles to emerge from a series of scandals.

Antonio Horta-Osorio’s departure, unveiled in a surprise midnight announcement on Monday, brings an abrupt end to the tenure of a turnaround specialist who promised to instill a culture of personal responsibility at the bank after its most turbulent period since the financial crisis. He was replaced by Axel P. Lehmann, a Credit Suisse board member who oversees the risk committee but is little known outside Zurich.

Horta-Osorio, who received a British knighthood after reviving Lloyds Banking Group Plc., is leaving after an investigation by the bank into reports that he broke quarantine protocols in the Switzerland and the UK, underscoring the growing pressure on business, political and even sporting elites who bypass protocols. The timing could hardly be worse for the Swiss bank after it counted on the Portugese banker to guide it past the collapses of Greensill Capital and Archegos Capital Management and bring much-needed stability at the top after a series of high-profile departures.

Even before news of his quarantine breaches began emerging last month, Horta-Osorio’s leadership style had received mixed reviews within Credit Suisse. Some executives who spoke on condition of anonymity before the ouster said the 57-year-old’s blunt approach was what the bank needed and appreciated him walking trading floors from New York to London and Paris. Others described him as divisive.

For Lehmann and Credit Suisse Chief Executive Officer Thomas Gottstein, the challenge will be reviving confidence among employees and investors after a steady exodus of talent and a 23% tumble in the bank’s stock over the past year. Horta-Osorio was widely seen as the architect of the bank’s strategic shift late last year to move resources away from the investment bank to wealth management, including an exit from the prime brokerage business at the heart of the Archegos blowup.

“This is about personal responsibility in the professional context,” said Sven Feldmann, associate dean at the Melbourne Business School. “Thinking that the chairman is above the law would have sent a wrong signal throughout the bank. By stepping down, the bank is showing it has zero tolerance for breaking the rules and is serious with implementing a culture change.”

Credit Suisse said last month that Horta-Osorio breached quarantine rules by leaving Switzerland before his period of mandated isolation was over. Reuters later reported that the financier had attended the Wimbledon tennis finals in London in early July, a time when arrivals from Europe were obliged to undergo quarantine. At the time, Horta-Osorio apologized for “unintentionally” breaking Swiss rules.

“I regret that a number of my personal actions have led to difficulties for the bank and compromised my ability to represent the bank internally and externally,” Horta-Osorio said in the statement. “I therefore believe that my resignation is in the interest of the bank and its stakeholders at this crucial time.”

Horta-Osorio joined Credit Suisse in April. The banker’s supporters have included major Credit Suisse shareholders such as David Herro of Harris Associates. “I am very, very gratified that the person at the top of the organization is extremely capable and has a good understanding of risk,” Herro told Bloomberg TV in October. Herro had also been a supporter of former CEO Tidjane Thiam before his ouster over a spying scandal.

At the same time, Credit Suisse’s stock has languished under Horta-Osorio and his leadership style has grated with some. In one example from the summer of 2021, he told a meeting of bankers that the firm had a great wealth management business “with ancillary services,” according to several people who heard the remarks. For several top dealmakers and traders, those words were perceived as a blow given the investment bank delivered more revenue than any other division at the firm. 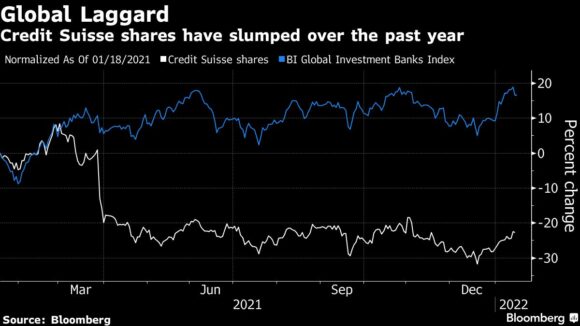 In turning to Lehmann, the bank is appointing a Swiss insider who spent almost two decades at Zurich Insurance Group AG and is well versed in risk management as Credit Suisse seeks to shore up its defences after the $5 billion hit from Archegos. He was elected to the bank’s board in October, having formerly served as Chief Operating Officer at UBS Group AG and head of the bank’s Swiss division. Like Horta-Osorio, he has retail and corporate banking experience while having had less exposure to investment banking.

Horta-Osorio’s six-month strategy review resulted in a simplified structure and the bank’s exit from the hedge fund business, though stopped short of the radical changes that characterized Deutsche Bank AG’s overhaul three years earlier. Credit Suisse’s stock has trailed global peers since the overhaul plan was announced in November. Speculation about possible M&A has ensued.

“The ongoing turnover with management changes brings further uncertainty,” JPMorgan Chase & Co. analysts led by Kian Abouhossein wrote in a note to clients. Speculation about a merger “is not credible in our view, with the change in chairman unlikely to be a trigger for this either; for now we see Credit Suisse continuing as a standalone entity.”

The appointment of Lehmann raises questions about whether he and Gottstein will continue with the strategy set out late last year or whether they will seek to undertake any further change of course, including further cuts to the investment bank. During his short time in charge, Horta-Osorio also made several high-level executive appointments and Lehmann could also move to bring in his own people.

In a statement, Lehmann said the bank had “set the right course” with its strategic review and that he would continue to work on strengthening the risk culture across the bank.

His departure came less than a day after an Australian court upheld a government decision to revoke Novak Djokovic’s visa after the tennis star sought to bypass an entry requirement in one of the world’s most vaccinated countries. In the UK, Prime Minister Boris Johnson’s future is in balance after a public backlash over rule-breaking parties at his Downing Street office.

–With assistance from Marion Halftermeyer.

Top photograph: A sign sits on the top of the UK headquarters of Credit Suisse Group AG in the Canary Wharf business, financial and shopping district of London, on Friday, Sept. 18, 2020. Photo credit: Simon Dawson/Bloomberg.