When two-thirds of the brokers at a prominent Calgary oil firm quit without explanation around the Easter weekend, the exodus chilled Canada’s oil market.

Now, a lawsuit filed against the firm, NE2 Group, purports to offer a window into life there during the years and months leading up to the walkout. Filed days after the resignations took place, the suit paints a picture of a toxic environment more reminiscent of oil trading’s mythic early days than the corporate culture of modern Calgary. It alleges that NE2’s president and owner, Timothy Gunn, physically and verbally abused both employees and clients in incidents spanning five years and accuses him of three incidents of sexual harassment. It also alleges he routinely referred to staff as “useless,” “replaceable” and “idiots,” in addition to a variety of profanity-laden expressions.

Weeks after the walkouts, the resignations continue to weigh on Canada’s oil market. The firm has historically played an important role in price-setting, its brokers handling enough volume to determine the benchmark prices of several Canadian crude grades. Those prices, in turn, underpin a key futures contract. In the days after the exodus, traders said they began to worry the firm didn’t have the manpower to ensure accurate prices and exited at least one CME contract used to hedge heavy crude. Open interest on that contract still hasn’t recovered. 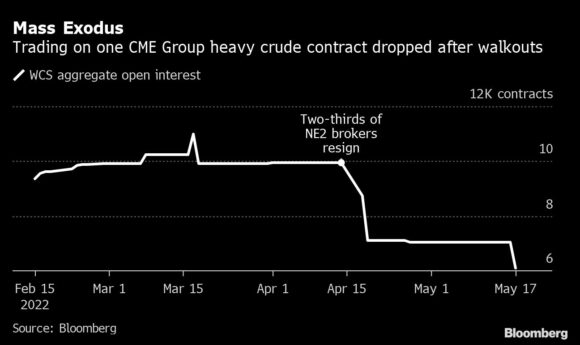 NE2, which has not yet submitted a statement of defence to the court, “takes these claims very seriously and expects behavior that is consistent with its workplace policy,” the firm said in a statement. “As we explore the allegations made in this claim, we expect additional facts will be revealed. NE2 will openly and transparently address these allegations through the Court process.” The firm didn’t immediately respond to questions about the market effects of the resignations.

Gunn couldn’t be reached for comment through NE2’s Calgary office and didn’t respond to messages sent by email and on LinkedIn.

The suit was brought by Mark Bennett, NE2’s former vice-president of North American energy, who alleges he was wrongfully dismissed in February after raising concerns about workplace harassment, “unilateral changes to employee compensation” and “the ongoing toxic work environment,” according to the suit. Bennett, who had worked for the firm since 2013 and is seeking millions in compensation, declined to comment.

Two months after Bennett’s dismissal, six brokers submitted resignation letters, according to people familiar with the situation who requested anonymity because they aren’t authorized to speak publicly. That equates to two-thirds of the brokerage desk in Calgary. The reasons for the exodus broadly align with the details laid out in Bennet’s suit and were not coordinated, the people said. The resignations, all on or around the Easter holiday weekend, coincided with the payout of annual bonuses following an exceptionally profitable year for the firm, said the people.