A logistically risky and costly transfer of crude between tankers at sea highlights the steps at least one Chinese buyer is willing to take to ensure the smooth flow of oil from eastern Russia to Asia.

Buyers are using creative ways to maintain flows as more shipowners shun Russian oil due to the potential fallout from financial sanctions, according to shipbrokers. Small vessels are being used to shuttle between Russia’s Kozmino port and the waters off Yeosu in South Korea, where cargoes undergo ship-to-ship transfer to supertankers for the next leg of the journey to China.

This process is unusual for ESPO crude, a type of Russian oil that’s typically loaded onto smaller tankers for a direct, five-day journey to China. While it adds to overall sailing time and costs, brokers said the practice is becoming more common as shipowners and buyers prioritize a ready supply of small vessels to ferry oil out of Kozmino in short runs.

Insurance (or Lack of It) Is Russian Oil’s Achilles’ Heel

Willing buyers of Russian crude are set to benefit from steep discounts relative to global benchmark prices as others avoid deals with Moscow due to its war in Ukraine. Cheap oil has made it attractive for top consumers such as China and India to keep importing from the OPEC+ producer, despite facing international condemnation and mounting logistical and financial hurdles.

China is set to take almost all of the ESPO loadings this month, a grade that often flows to other countries such as South Korea and Japan due to the close proximity and simple logistics. Cargoes are typically transported directly from loading to receiving ports on aframax and Long Range-2 tankers.

The number of shipowners and insurers willing to handle loadings from eastern and western Russia is dwindling, said shipbrokers. This has created a logistical challenge for producers and buyers as they work with fewer tankers and need to consider how best to deploy the types of ships available.

Yang Li Hu and Yang Mei Hu — both LR-2 tankers — loaded ESPO between May 16 and May 18, before traveling toward Yeosu to transfer oil to supertanker Yuan Qiu Hu, according to ship-tracking data. The very-large crude carrier was only three-quarters full when it headed for China.

The vessels are owned by China’s Cosco Shipping Holdings Co., according to shipbrokers, while Unipec chartered the tankers. Nobody answered calls to the spokesman’s office at Cosco, while an email wasn’t immediately responded to. A Beijing-based official with the press office at China Petrochemical Corp. — Unipec’s parent — declined to comment. 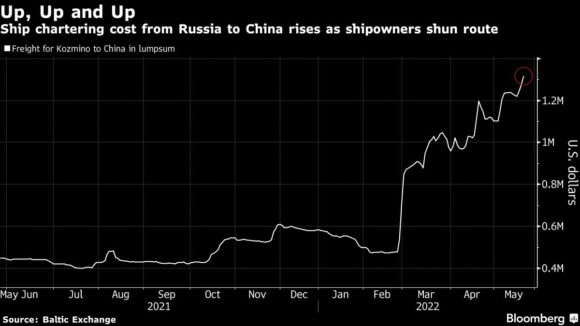 A COVID-19 resurgence in China sapped some demand and crimped its long-haul crude imports, leading to an ample supply of VLCCs. The abundance of bigger ships means that the rare ESPO ship-to-ship transfer could be replicated more often as the smaller vessels make shorter trips.

Shipbrokers said smaller tankers which are suited to shuttle cargoes out of Kozmino efficiently are now in high demand. Since the recent transfer, Yang Li Hu picked up another ESPO cargo on May 23 and is en route to Yeosu, while Yang Mei Hu is scheduled to reach Kozmino for its next loading on May 26.

While ship-to-ship transfers from small to large tankers are common for long-haul shipments of crude such as Russia’s Urals, which is increasingly flowing from the Baltic Sea to Asia, it’s almost unheard of for ESPO. That’s due to the short voyage required to deliver cargoes to major customers in Asia.

Shipowners such as Cosco Shipping and Russia’s Sovcomflot are handling a sizable amount of Russian crude from ports such as Kozmino and Ust Luga in the Baltic Sea. In recent weeks, others such as Maersk wound up their Russian dealings, while more companies are taking a wait-and-see approach on concerns of harsher rules and a potential oil ban by the European Union.

–With assistance from Sharon Cho and Sarah Chen.

Photograph: A crew member walks on the deck of an oil tanker anchored in the Pacific Ocean in this aerial photograph taken above Long Beach, California, U.S., on Friday, May 1, 2020. Photo credit: Patrick T. Fallon/Bloomberg