Minnesota’s high court has declined to expand the state’s doctrine of implied primary assumption of risk to recreational skiing and snowboarding.

The Minnesota Supreme Court came to that conclusion Soderberg v. Anderson, published Jan. 23, 2019. The case involves a ski instructor who was teaching a young student when she was severely injured when she was struck by a snowboarder performing an aerial trick.

The accident occurred in 2016 in a ski area outside of Duluth, Minnesota — Spirit Mountain. Ski instructor Julie Soderberg, a Spirit Mountain employee, was instructing a six-year old on a run marked as a “slow skiing area” when the snowboarder, 35-year old Lucas Anderson, merged onto the slow ski area from a more difficult run. Increasing his speed, Anderson performed an aerial trick known as the backside 180. “Halfway through the trick, Anderson’s back was fully facing downhill. He could not see what was below him,” the Court’s opinion states.

Soderberg was downhill from Anderson when the snowboarder, coming down from his maneuver, struck her. He “landed on Soderberg, hitting her behind her left shoulder. Soderberg lost consciousness upon impact. She sustained serious injuries,” the Court wrote.

Soderberg sued Anderson for negligence but the district court granted summary judgment to Anderson, who had argued that “based on undisputed facts and the doctrine of implied primary assumption of risk, he owed Soderberg no duty of care and was entitled to judgment as a matter of law.”

An appeals court reversed that decision and remanded the case, finding it unlikely that “Soderberg appreciated the risk that she could be crushed from above in a slow skiing area” and that Anderson, with his conduct, had “‘enlarged the inherent risk of skiing.'”

Anderson petitioned for review and the state Supreme Court granted the petition in order to “specifically address whether Minnesota should continue to recognize the doctrine of implied primary assumption of risk.”

Because the parties agreed that “Soderberg did not expressly assume the risk of being hit by Anderson,” the Supreme Court wrote, “the issue is whether she assumed the risk by implication.”

The Court noted that it had considered the applicability of the doctrine of implied assumption of risk in previous sports-related cases.

In one involving a spectator who was hit by fly ball at a baseball game, for instance, the Court “rejected the proposition that spectators assume the risk of injury if seated behind the protective screen between home plate and the grandstand.” In that case it determined the baseball club was responsible for providing a sufficiently sized screen to protect spectators in vulnerable areas. On the other hand, it also previously determined that baseball fans sitting outside the screen-protected viewing areas do assume the risk of injury inherent in the sport.

Regarding the doctrine of implied primary assumption of risk and flying golf balls, the Supreme Court made a distinction between tournament play and recreational play. It held in one case that, while there is “inherent danger” of spectator injury from flying golf balls at golf tournaments, claims of negligence arising out of recreational golfing injuries “are not barred by the doctrine.” That’s because if a recreational “golfer knows that another person is in the zone of danger, the golfer should either give the other a warning or desist from striking the ball,” the Court said.

In the case of injuries sustained in recreational ice skating, the Court determined that there is an inherent risk of participating in the sport, but recognized that reckless or inept skating that causes injury to another party would not be exempt from negligence claims.

With the negligence question in mind, the Supreme Court in Soderberg v. Anderson declined to “extend the doctrine of implied primary assumption of risk to recreational downhill skiing and snowboarding. To do so would relieve skiers and snowboarders (collectively, ‘skiers’) of any duty of care owed to others while engaged in their activity.” 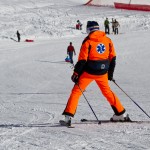 The Court cited three reasons for its decision.

One is that while skiers sometimes do collide with each other, such occurrences are not all that common. The Court stated that the “record does not substantiate that injurious collisions between skiers are so frequent and damaging that they must be considered inherent in the sport.” Plus, the Court said, the risk of collisions can be reduced through “common sense and personal awareness” on the slopes.

The second reason the Court cited for not extending the doctrine to skiing and snowboarding is simply that it was “loathe” to extend it to an additional activity. In reaching that conclusion, the Court recognized the national trend toward limiting or abolishing the doctrine of implied primary assumption of risk.

Finally, the court rejected the notion that not applying the implied primary assumption of risk doctrine to recreational downhill sports would deter Minnesotans “from vigorously participating and ski operators will be adversely affected.” There’s no record to suggest that “the prospect of negligent patrons being held liable chills participation in skiing and snowboarding,” the Court said.

The Court , therefore, upheld the appeals court’s reversal and remand of the case, albeit for different reasons.