Forward collision avoidance systems, particularly those that can brake autonomously, along with adaptive headlights, which shift direction as the driver steers, show the biggest crash reductions. Lane departure warning appears to hurt, rather than help, though it’s not clear why, and other systems, such as blind spot detection and park assist, aren’t showing clear effects on crash patterns yet.

“As more automakers offer advanced technologies on their vehicles, insurance data provide an early glimpse of how these features perform in the real world,” says Matt Moore, vice president of HLDI, an affiliate of the Insurance Institute for Highway Safety (IIHS). “So far, forward collision technology is reducing claims, particularly for damage to other vehicles, and adaptive headlights are having an even bigger impact than we had anticipated.”

HLDI analysts looked at how each feature affected claim frequency under a variety of insurance coverages for damage and injuries. Clear patterns were seen in claims under property damage liability (PDL) insurance, which covers damage caused by the insured vehicle to another vehicle, and collision insurance, which covers damage to the insured vehicle. Frequency is measured as the number of claims relative to the number of insured vehicle years. An insured vehicle year is one vehicle insured for one year, two vehicles for six months, etc. The model years of the vehicles included ranged from 2000 to 2011, depending on when an automaker introduced a feature. Insurance data through August 2011 were used.

The crash avoidance systems studied were all offered as optional equipment. The automakers supplied HLDI with identification numbers of vehicles that had each feature, allowing HLDI to compare the insurance records for those vehicles with the same models without the feature. In each analysis, HLDI controlled for factors that could influence claim rates, including driver age and gender, garaging state and collision deductible. 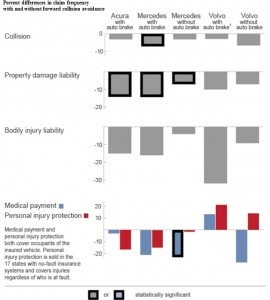 Forward collision warning systems alert the driver if the vehicle is gaining on the traffic ahead of it so quickly that it is about to crash. Some of these systems also are equipped with autonomous braking, meaning the vehicle will brake on its own if the driver doesn’t respond in time.

Claims for the front-to-rear collisions that forward collision avoidance systems are meant to address are common under PDL coverage, and HLDI found the technology reduces PDL claim frequency. Claim frequency under collision coverage, which includes many of the same crashes that fall under property damage liability but also a lot of single-vehicle crashes that these systems are not designed to address, was reduced but by a smaller amount. Some reductions also were seen for injury claims.

HLDI examined forward collision systems offered on Acura, Mercedes-Benz and Volvo vehicles. PDL frequencies for Acura and Mercedes models were 14 percent lower when the vehicles were equipped with forward collision warning with autonomous braking than when they weren’t. Volvo’s autonomous braking system also reduced crashes 10 percent, but that finding wasn’t statistically significant. The Volvo system comes bundled with lane departure warning and fatigue warning, so that figure may be affected by those features as well.

Mercedes and Volvo also offer versions of forward collision warning that don’t include autonomous braking. These appeared to lower crash rates, too, but not to the same extent as versions that do include it. These systems probably have more modest effects on PDL claims because they rely on drivers to respond appropriately to warnings and can’t directly avoid crashes. There also are other differences between systems that do and don’t have auto brake. For example, Volvo’s system without auto brake is functional only at speeds over 20 mph, while the version with auto brake starts working at 3 mph. 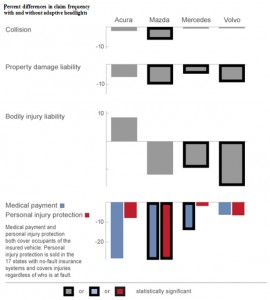 Adaptive headlights respond to steering input to help a driver see around a curve in the dark. The headlights’ horizontal aim is adjusted based on the speed of the vehicle, direction of the steering wheel and other factors so that the lights are directed where the vehicle is heading.

HLDI looked at adaptive headlights offered by Acura, Mazda, Mercedes and Volvo. As with forward collision warning, bigger benefits showed up in PDL claims for damage to other vehicles than in collision claims for damage to the insured vehicles. PDL claims fell as much as 10 percent with adaptive headlights. That was surprising, since only about 7 percent of police-reported crashes occur between 9 p.m. and 6 a.m. and involve more than one vehicle. An even smaller percentage are multiple-vehicle, nighttime crashes occurring on a curve, where adaptive headlights would be expected to have an effect. It’s possible that other differences between the adaptive headlights and conventional ones besides steerability — for example, in brightness or range — may have played a role in reducing crashes with other vehicles. However, those differences weren’t consistent among all vehicles in the analysis.

Researchers had expected that the biggest effects from adaptive headlights would be on single-vehicle crashes reflected in collision coverage. Collision claim frequency did fall, but only by a little. However, injury claims of all types, both for injuries to occupants of the insured vehicles and to other road users, fell substantially for all but one make.

“All four adaptive headlight systems we looked at show benefits for most insurance coverages, and many of these estimated reductions are statistically significant,” Moore says. “These lights appear to help in more situations than we anticipated, though we don’t yet know why.” 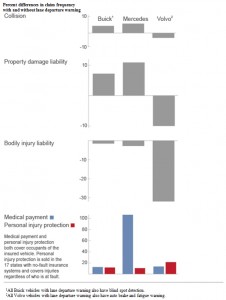 In contrast to the better-than-expected results for adaptive headlights, lane departure warning systems from Buick and Mercedes appeared to have the opposite of their intended effect. Both were associated with increased claim rates under collision and PDL coverages and for injuries to occupants of the insured vehicles. Although the increases were not statistically significant, the results suggest these particular systems aren’t reducing overall crashes. Volvos with lane departure warning had lower claim frequencies under most coverages than Volvos without the feature, but those vehicles also had forward collision warning with auto brake, which more likely accounts for the benefits.

IIHS researchers previously calculated that if all vehicles had lane departure warning, the technology could prevent or mitigate up to 7,529 fatal crashes, provided the systems worked as intended and drivers always responded appropriately. That potential stems from the large proportion of fatal crashes that are a result of a vehicle leaving the roadway.

However, as a proportion of all crashes, not just fatal ones, drifting off the road is not common. That may help explain why no benefit has shown up so far in the claims data. The HLDI results also could point to problems with the current technology, which relies on cameras to track lane markings and thus isn’t effective if the markings aren’t clearly visible.

“Lane departure warning may end up saving lives down the road, but so far these particular versions aren’t preventing insurance claims,” Moore says. “It may be that drivers are getting too many false alarms, which could make them tune out the warnings or turn them off completely. Of course, that doesn’t explain why the systems seem to increase claim rates, but we need to gather more data to see if that’s truly happening.”

HLDI has yet to look at lane departure prevention, which, unlike a warning system, actively keeps a vehicle in its lane and could have a different impact on claims.

“Just as forward collision warning systems that include autonomous braking cut crashes more sharply than those that don’t, lane departure prevention systems that don’t rely on a driver’s response may hold more promise than the systems HLDI has looked at so far,” says David Zuby, chief research officer at IIHS. “The lane departure prevention systems are newer and less common than the warning systems, so we’ll have to wait for more data before we can look for a pattern there.”

The latest studies follow a HLDI report last year on Volvo’s City Safety, a forward collision avoidance system that applies the brakes automatically to prevent or mitigate low-speed front-to-rear collisions. Volvo XC60s with standard City Safety had fewer claims than other midsize luxury SUVs and other Volvos without the feature. That study showed how effective such technology could be in preventing costly fender-benders. The features in the current analyses could help address more serious crashes.

“These analyses are the first to estimate real-world effectiveness of several crash avoidance technologies that have been filtering into the market recently,” Zuby says. “While some results indicate the need for further investigation, it’s clear that certain systems, such as those that help drivers avoid collisions with the vehicle in front or better illuminate the road ahead, can play a role in making roads safer for everyone.”

Crisis Within a Crisis: How COVID-19 Is Driving the Opioid Epidemic