Many believe there is still opportunity for independent insurance agents and their carriers to grab personal lines market share. But to do so they must find a way to compete against the giant direct response and captive carriers that are beating them at personal lines. While technology must be part of independent agents’ strategy, that alone is not enough.

“There are a small but growing number of agencies that are seeing that personal lines actually has some great opportunities for them,” says Steve Anderson, a technology expert who provides information to insurance agents about how they can use technology to increase revenue.

The high-tech tools that will enable agencies to grow their business in personal lines already exist, Anderson says. “We could argue how good it is, or what pieces are we missing, but the reality is there’s more technology available today for personal lines than there ever has been to streamline both the sales and the service process.”

For agencies to beat the competition in personal lines requires more than technology, he says. It requires a change in the way agents think and how they do business.

“The agency actually has to think differently about how to implement technology and use those tools in their organization,” Anderson says.

But Anderson says the opportunity for agents to grow in personal lines is there. “I believe there’s lots of opportunity in the personal lines arena to build the book. It really takes a marketing mindset. I think that’s where a lot of agencies are struggling. There is certainly technology, which can really help them with that process.” 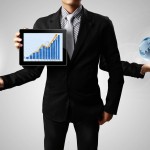 For years, independent agencies have been losing their grip on the personal lines market.

Direct response insurers now control more than one in every six dollars of personal auto premiums. If that growth rate holds in 2012, direct writers will approach 20 percent of the auto market share in the next year or two, the IIABA report says.

But technology is closing some of the gap, some say.

“Personal lines is perhaps one of the best opportunities available to the agencies, for a couple reasons,” Anderson says. “I think agencies have a great story to tell. I think agents could compete pretty effectively if they have the opportunity.”

But also, according to a survey by Reagan Consulting, personal lines represents twice the profit potential than commercial lines, Anderson says.

“There’s some real benefit there, if an agency will look at personal lines perhaps a little bit differently,” Anderson says. “From a technology standpoint, there are some real tools available, if they’ll use them.”

“With the proliferation of the Internet, consumers have become very savvy,” Moriyama says, “Knowledge is power” for both consumers and the agent, according to Moriyama, who also serves as incoming president of the Vertafore user group NetVu.

Moriyama, an agent for 24 years, says years ago his agency could provide just one or two quotes for a personal lines prospective client. Today, that’s not enough. “You have to do more as an agent. You have to canvass the market.” To do that, companies, brokers, and independent agents have to use and have access to comparative rating technologies just to survive, he says.

While direct writers have had an advantage on personal lines, the one area where the independent agent channel excels is choice, Winterburn says. “By the definition of independent they represent multiple carriers.”

That’s great in concept but it can be problematic in the quoting process, he says. Comparative rating systems have been a game changer, Winterburn says, allowing agencies to aggregate a rate for all of its carriers. “They can enter the data one time and in an instance get a quote for every one of their carriers,” he says.

While technology has opened the door for consumers seeking information on insurance, it also has led to new ways that the industry can profile risk.

“Today there’s an unbelievable amount of information that goes into generating a guesstimation of risk for a premium,” Winterburn says. “Without technology it’s almost impossible to know where a carrier is going to fall on a given risk.” In Winterburn’s view, the industry is nearing a point where each individual will have their own unique set of characteristics that add-up to a premium just for them.

“We are almost getting to a rate for one or a premium for one,” he says. “To me that’s where technology has made an independent agent competitive to a degree that they weren’t in the past in personal lines.”

Anderson sees agents putting more emphasis on website development and their ability to allow for personal lines quoting directly from an agency’s homepage.

“The personal consumer is definitely starting their research online, with a Google search,” he says. Technology focused on website rating, search engine optimization, and search engine marketing is a piece of the puzzle in winning personal lines market share, he says. “Being available online is a key part of how they can certainly, at least initially contact and interact with consumers.”

One way to beat the competition is through the use social and digital marketing methods and technology that allows mobility in the sales and service process, the experts say.

According to one agent, the digital world is a perfect tool for insurance agents trying to build strong relationships with clients and others.

That doesn’t mean agents can’t make sales too, he adds. Cass has built his agency on nothing but social media and digital market methods.

“I don’t advertise in the phone book, on TV, in the newspaper — the only place I advertise is on Facebook, so that’s where I’m getting my clients,” he says.

His Facebook page, JDC Insurance Group, has close to 4,800 “likes” and counting. He posts regular comments to his page and writes an insurance-related blog at least four to five times a month. But it’s not just about selling insurance; it’s about relationships, he says — relationships that often develop into personal relationships, thanks to Facebook.

“I’m at a lot of sales and marketing meetings. They say you need to touch your client at least two to three times a year,” Cass says. “Well, how about trying to touch them three times a week?”

That would have been impossible to do just five or six years ago, but in today’s social media world one post or blog entry creates value and builds strong relationships with clients, he says.

“Whether they are your client or your prospect, you are touching them. It’s no different than sending out a letter to all insureds saying, ‘Make sure you have your jewelry scheduled on your homeowners policy.'”

“When someone calls my agency, we might answer the phone this way: ‘Hello, hey Jason this is Jim.’ And I say, ‘Hi Jim, man I’ve been following you and things are going awesome. I see that Suzie got first place in the swim meet and Ryan got perfect attendance in school. Tell me about the secrets to raising such a good family?’ Do you see the difference?” Cass asks. “This is how we need to be selling. It’s more personal.”

Being mobile is just as important in today’s fast-paced world, Cass says. “Mobile is huge and it’s going to get bigger.”

One easy transition agencies can make to become “mobile” is to make sure their agency’s website is “mobile ready,” Cass says. “Not having a mobile ready website drives people crazy,” Cass says. It’s easy to do and very affordable, he says. “It cost me $60 to have my website mobile ready.”

Anderson sees some agencies beginning to experiment with mobile apps for smartphones or tablet devices in an effort to become more mobile.

“That is beginning again to get some play although I think that’s probably a small piece of it right now,” he says. “From a customer service standpoint, providing some functions into either agency systems or agency processes for mobile devices, be it a smartphone or tablet type devices, is another area where I’m seeing agencies experiment.”

Anderson says the industry hasn’t identified exactly what the consumer wants when it comes to technology tools in personal insurance, but he predicts that agency-branded mobile apps that offer customer service options, such as auto ID cards, requesting vehicle changes and basic customer service activities will become more important in the future.

One of the biggest problems Anderson sees agencies making in personal lines is what he calls “follow up failure.” Most agencies do not do a good job of following up with prospects and clients to offer additional services, additional policies or upgrades to policy limits, he says.

“It’s not just a place to list prospect information. It truly is creating a multistep, marketing process, a system software program and process – that actually takes a person through the process,” Anderson says. “The benefit is that the agency doesn’t have to have personnel to remember what to do next. The system is built to allow them to do that.”

Vertafore’s Winterburn says the technology is there. “We’ve reached a point where technology has almost leapfrogged our imagination,” he says. “So a lot of agents are still struggling to figure out how to take advantage of some of those technologies.”

Anderson believes agencies can grow in the home and auto markets with the right technology. “I think personal lines is just a huge opportunity for those agents who are willing to work on it,” he says.