A 100-car “naturalistic” driving study conducted by the Virginia Tech Transportation Institute says that fatigue is a cause of 20 percent of car crashes, rather than the two or three percent previously estimated based on surveys, simulator studies and test tracks.

Older drivers can face similar issues with late nights and early work times, but have more experience coping with moderate fatigue – although, not always, the researchers say.

“A finding that surprised people is the prevalence of fatigue during the day. We found significantly more crashes/near crashes due to fatigue during the day than at night,” said Charlie Klauer, group leader for teen risk and injury prevention at the transportation institute’s Center for Vulnerable Road User Safety.

“The study allowed us, for the first time, to observe driver behavior just prior to a crash. In 20 percent of all crashes and 16 percent of all near crashes, the driver was showing fatigue. We saw eye-lid closure, head bobbing, severe loss of facial musculature, micro-sleep – which is when your eyes drift shut and then pop up,” said Klauer. “This was not just yawning. The drivers were asleep.” 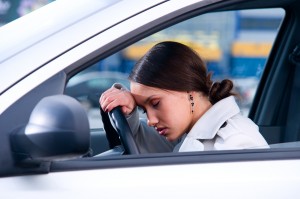 Naturalist research involves observing behavior as it takes place in its natural setting with very limited or no interference with the subjects.

One-hundred drivers who commute into or out of the Northern Virginia/Washington, D.C., metropolitan area were initially recruited as primary drivers to have their vehicles instrumented or receive a leased vehicle instrumented for the study. Since other family members and friends would occasionally drive the instrumented vehicles, data were collected on 132 additional drivers.

Researchers selected a larger sample of drivers below the age of 25, compared with the total population of drivers, and a sample that drove more than the average number of miles.

Researchers viewed more than 110,000 events in order to validate 10,548 events – specifically, 82 crashes, including 13 where the data was incomplete; 761 near crashes; 8,295 incidents, such as braking hard for slowing or stopped traffic; and 1,423 non-conflict events, such as running a stop light with no traffic present.

In addition, 20,000 randomly selected 6-second segments of video were viewed. Incidents of moderate to severe driver fatigue were noted, providing an estimate of the amount of time drivers were fatigued but were not involved in a crash or near-crash.

“Applying the findings to the population at-large, these results suggest that drivers are at a four times greater risk of a crash or near-crash if they choose to drive while fatigued,” said Tom Dingus, director of the Virginia Tech Transportation Institute. “That suggests that about 12 percent of all crashes and near-crashes in the population are attributable to fatigue.”

Analyses with the 100-car study database will continue, plus data from a new U.S. study, the Strategic Highway Research Program, with 2,000 cars, will provide greater statistical power.

In addition, new naturalistic driving studies focused on 16- to 18-year-old drivers are now under way. A Naturalistic Teenage Driving Study, sponsored by the National Institute of Child Health and Human Development, seeks to determine the effects of experience on driving performance, and the extent of variability in driving performance under specific driving conditions, such as at night.

The National Highway Traffic Safety Administration provided additional funds to analyze the data from the teen driving study to help determine which driving performance parameters and situations should be used to provide feedback about unsafe driving performance to newly licensed teens.

The 100-Car Naturalistic Driving data set was collected in 2003 and 2004 and has been mined numerous times since. Databases from the 100-Car study are available for public use on the Virginia Tech Transportation Institute website. Several publications resulting from analysis of the data are reported by the National Highway Traffic Safety Administration.