After four months of going up at 5 percent, commercial property/casualty insurance rates have moderated. The July 2013 rate increase was plus 4 percent, according to MarketScout’s market index.

Rate increases for commercial auto, workers’ compensation, directors and officers, and employment practices liability in the U.S. all moderated by 1 percent. Fiduciary rates were up slightly from plus 2 percent to plus 3 percent.

By industry classification, every industry group except for public entity business moderated by 1 percent.

“The market is quiet. Many underwriters, insurers, and brokers are on holiday after securing their July 1 renewals,” said MarketScout CEO Richard Kerr.

“Without any catastrophic events, it is natural to see the market drift downward. We will have a much better feel for where things are headed once the results are tabulated for September and October.”

MarketScout reported that increases for commercial insurance were about 5 percent from March through June.

Commercial property/casualty pricing continued to gently creep upwards in the second quarter, however signs of some moderating of increases also surfaced.

The July index from MarketScout reflecting some moderating of increases tracks with a second quarter report by The Council of Insurance Agents and Brokers showing that, on average, pricing rose at a rate of 4.3 percent in the second quarter compared to 5.2 percent in the first quarter of 2013.

A summary of the July 2013 rates by coverage, industry class and account size prepared by MarketScout are shown below. The National Alliance for Insurance Education and Research conducts the pricing surveys used in MarketScout’s analysis of market conditions. 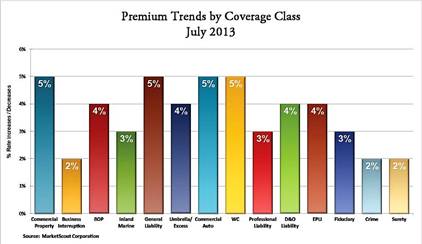 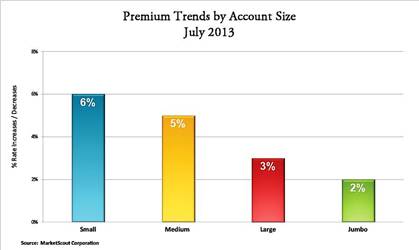 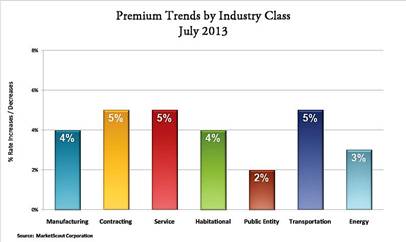