Private auto insurance industry direct premiums written rose 5.13 percent in the third quarter of 2014, the largest third-quarter year-over-year growth in the past 10 years, according to an analysis by SNL Financial.

The 30 largest auto writers by market share also grew at a healthy pace, adding 4.86 percent year-over-year to reach $42.98 billion in direct premiums written. Of these 30 insurers, almost one-third reported an increase of more than 5 percent.

State Farm reported a 6.13 percent year-over-year increase in private auto business, the highest for any quarter in the last 10 years, on top of its already large premium base.

GEICO posted the largest growth rate among the top 30 insurers in the third quarter. The company’s direct premiums written rose 10.31 percent compared to the same quarter in the prior year, continuing its double-digit growth of more than 10 percent on a year-over-year basis for eight quarters in a row.

Allstate recorded private auto direct premiums written growth of 5.46 percent year over year in the third quarter. This is the second consecutive quarter in which the company reported premium growth of more than 5 percent after premiums grew 5.67 percent year-over-year in the second quarter. The Encompass brand reported an auto loss ratio of 78.0 percent in the third quarter, an increase of 7.1 points compared to the previous year due to unfavorable reserve re-estimates, according to Allstate’s latest Form 10-Q filing. The Esurance and Allstate brands each experienced a modest decline in their auto loss ratios.

Kemper Corp. continued its slide, recording the largest year-over-year decrease among the top 30 insurers as its premiums fell 12.59 percent to $204.6 million. Kemper attributed the decline to the runoff of its direct-to-consumer business in its latest earnings call.

Kemper on Dec. 11 announced that it entered into a definitive agreement to acquire Alliance United Group and its subsidiaries in a deal that might help Kemper reverse its downward trend in the auto insurance business. Alliance United Insurance Co., the underwriting subsidiary of Alliance United Group, grew at least 29 percent year-over-year in the past five years except 2011, when it grew just 8.17 percent. The company is expected to write more than $300 million in 2014 direct premiums, according to a news release announcing the transaction. According to an SNL study, this deal should increase Kemper’s private auto market share in California where Alliance United is one of the top five writers of nonstandard auto insurance.

Auto Club Insurance Association reported a higher loss ratio for its auto insurance business in recent times. Its private auto direct loss ratio was 146.49 percent and 490.21 percent in 2013 and 2012, respectively. 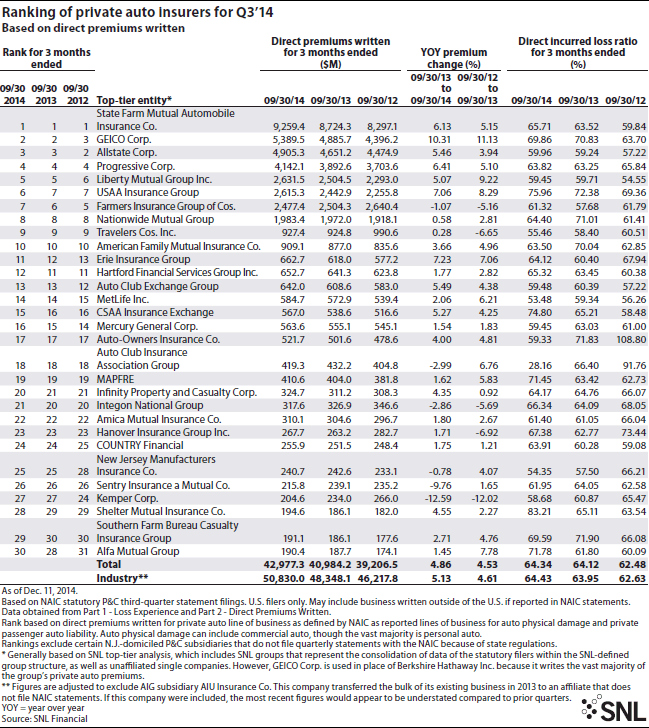