Maurice “Hank” Greenberg spent some of his 90th birthday party like he’s spent much of the past decade: angry.

As he addressed his family at a lunch at a private estate this month, one of his sons made another laugh. Then their sister cracked up. Greenberg told her to leave if she couldn’t keep it down.

“It got held onto for the rest of the day, so that when we were leaving he still gave me grief about it,” his daughter, Cathleen London, a 52-year-old family physician, said a day later. “I said, ‘I’m sorry.'”

Greenberg, who built American International Group Inc. into the world’s largest insurer, doesn’t let go easily. A decade after losing control of the company, he’s waging one of Wall Street’s longest and most expensive wars for redemption. That means trying to build up another insurance business while fighting claims that he’s responsible for sham transactions, suing former New York Attorney General Eliot Spitzer for defamation and taking the federal government to court, saying the 2008 bailout that rescued AIG cheated shareholders out of at least $23 billion.)

Winning at least one of those fights isn’t as improbable as it once seemed. As the U.S. trial got under way last year, Credit Suisse Group AG analysts put his chances of winning at 1 in 10 and the New Yorker described him as “a dogged old coot.” The bank boosted odds to about 1 in 3 after his lawyer David Boies, who has represented Al Gore and Philip Morris, hauled Ben S. Bernanke, Henry Paulson and Timothy Geithner to the witness stand and wrapped up closing arguments last month.

Trim and fit in his Park Avenue office this month, a waist- high hourglass across from his desk, he didn’t want to answer questions about the case, his company, himself or turning 90. 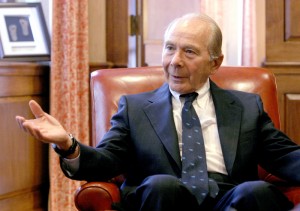 From his New York office, Greenberg oversees a group of insurance and investment businesses known as Starr Cos., whose assets of $15.3 billion at the end of 2014 were about a 30th of AIG’s. Visitors are greeted by a security director who wears a horseshoe mustache and introduces himself as Harry. There’s a copy of the U.S. Constitution, a photo of an exploding bomb and 11 security video feeds at his workstation. While classical music played, he demonstrated how to twist the skin over the pectoral muscle in combat. Down the hall, outside Greenberg’s office, a smaller hourglass sits on his assistant’s desk.

A few days after the family birthday party, Henry Kissinger, who’s 92, toasted Greenberg at a dinner at the Council on Foreign Relations in New York.

“I have one piece of advice to the younger people here,” Richard Nixon’s secretary of state told revelers, he recalled a week later. “It is less painful to give Hank Greenberg what he wants than to resist.”

Greenberg got what he wanted throughout most of his life, according to his 2013 memoir, “The AIG Story.” It opens with his return from the Korean War, when he tells an insurance executive that his underling is a jerk and is rewarded with a job. The government is an enemy by paragraph three, he threatens a rival by page 10 and he’s boss by AIG’s 1969 public offering.

His description of what comes next reads like a pulpy spy novel. As AIG expands into China and the Soviet Union and offers insurance for kidnapping and a secret satellite, Greenberg slays a Hungarian stag, outfoxes Mikhail Gorbachev, yells at Ferdinand Marcos and rescues a jailed colleague accused by Iran of spying.

Even that freed colleague calls Greenberg stubborn. “Hank is not an easy man to work for,” K.C. Shabani said this month while praising his drive. “Very rude to me, almost abrasive.”

Jeff Sonnenfeld, a professor at the Yale School of Management and a friend of Greenberg’s, brought up Siddhartha, Odysseus, Nietzsche, Moses and Job to describe him. Greenberg’s own book gets biblical when it says his “wrath befell those who delayed or deceived.”

By 1998, AIG’s market value was more than $90 billion. Not only did it sell life and property-and-casualty insurance, it had a top performer called AIG Financial Products starting to sell credit-default swaps, derivatives that allow bond investors to protect against or bet on losses.

His four decades at AIG ended with the government accusing the company of tricks to hide losses and boost reserves. After he resigned under pressure in 2005, AIG apologized for deceiving the public, restated earnings by more than $3 billion and paid $1.6 billion to resolve state and federal claims it misled investors, faked bids and cheated workers’ compensation plans. It didn’t admit or deny allegations by the Securities and Exchange Commission.

Things got worse. Hemorrhaging from the credit-default protection it sold for subprime mortgages, AIG was staggering toward collapse in September 2008. Greenberg, who controlled about 11 percent of the company through personal holdings and firms he ran, didn’t welcome the government bailout designed to save AIG from a bankruptcy that could have wiped out his stake.

Instead, he took the U.S. to court. In its suit, one of his Starr companies says the government paid $500,000 for 79.9 percent of AIG’s stock, then worth more than $20 billion, and didn’t get shareholder approval. The complaint says the U.S. offered a loan at an “extortionate” rate, about 14 percent, while propping up banks on better terms. AIG’s board accepted the rescue, which swelled to $182 billion and led to a better outcome than bankruptcy, the government has argued.

“You got to fight for what you believe in,” Greenberg said in his office. “You can’t have everybody thinking the same way. It’s not normal.”

U.S. Court of Federal Claims Judge Thomas Wheeler sided with him several times during the trial. When AIG refused to join the case, the judge criticized a lawyer for the Treasury Department for leaning on the company’s board. And a few of the 30,000 government documents Wheeler ordered turned over to Starr showed the Federal Reserve Bank of New York’s outside advisers doubting the bank’s authority to demand AIG stock and looking to avoid a shareholder vote.

“What seemed like a Don Quixote kind of approach has suddenly become too close to call,” said Evercore Partners Inc. adviser Tom Leonardi, who was Connecticut’s insurance commissioner until last year.

A verdict is expected in the next few weeks.

Other judges haven’t always seen things Greenberg’s way. State Supreme Court Justice Charles Ramos, who’s overseeing the New York suit alleging that sham transactions boosted AIG’s reserves, called the case “devastating” in a 2010 hearing. Greenberg, who said in a court filing that the case relies on false testimony and is a waste of taxpayer money, was rejected when he asked Ramos to disqualify himself and lost a bid to remove him. Last year, another judge threw out many of the defamation claims against Spitzer. Both sides have appealed.

In his Starr office this month, he said the U.S. has changed over the past two decades. He wouldn’t say how or if it makes him happy. “Happy with it? What kind of question! I don’t get happy or sad by the day.”

Ernie Patrikis, general counsel for the New York Fed and then for AIG until 2006, said there’s a softer side to his former boss. He remembered Greenberg saying in a meeting that he was glum about his sick dog, Snowball. Then he ordered colleagues there not to share his feelings with others.

“Human nature tends to make people become more complacent, less driven,” said another former colleague, Brian Duperreault, who runs Bermuda-based Hamilton Insurance Group Ltd. “You start to accept things, because you know you try to change them and you can’t. He never accepts anything.”

Greenberg and Beattie had a brief reunion in the Four Seasons Restaurant, a few blocks from Starr’s Park Avenue office. When the lawyer said hello, Greenberg walked away.

Then he came back and asked the lawyer if he slept well at night. Beattie said he did. Greenberg told him that he shouldn’t, and left.

–With assistance from Chris Dolmetsch in New York State Supreme Court in Manhattan, Andrew Zajac in Washington and Zachary Tracer in New York.

Editor’s Note: In a 2013 IJTV video interview, Greenberg discusses his career, AIG, Starr, his philosophy and his battles with the government, Spitzer and more. For the complete interview with Greenberg, see below or visit here.