Rates for commercial property/casualty insurance fell four percent in the first month of the new year, continuing a downward trend that is unlikely to halt anytime soon, according to Richard Kerr, CEO of MarketScout.

“Commercial property insurers are getting ready to scratch each other’s eyes out as they fight for market share,” Kerr said on the release of his firm’s monthly rate barometer. “We see nothing to prevent commercial property rates from dropping further.”

The composite rate in MarketScout’s index for commercial lines in the U.S. was down in December 2015 by four percent also.

MarketScout’s results are based on new and renewal placements across the country and pricing surveys by the National Alliance for Insurance Education and Research.

By accounts size, rates for small and medium sized accounts (all under $250,000) were more competitive in January 2016 than in the prior month. Large and jumbo accounts (over 250,001) were assessed rates slightly higher in January versus December.

MarketScout’s report tracks with predictions by Kroll Bond Rating Agency in its U.S. Property/Casualty Insurers 2016 outlook issued in late December Kroll said ricing will either be flat or down over the next 12 to 18 months, with the biggest pressure in commercial lines, property and reinsurance.

According to Kroll’s expectations, commercial lines rates will dip in the low- to mid-single digits, but property lines and reinsurance rates could decline by more than 10 percent in response to continued favorable experience and a lack of major weather events (going back to 2012 now).

Meanwhile, MarketScout’s personal lines barometers showed personal lines insurers are maintaining an even pace for pricing with a slight decrease in rates from the same time last year.

“All is steady in the personal lines market. Rates continue to fall at an even pace. We expect an ongoing competitive market,” Kerr said.

Summaries of the January 2016 commercial lines rates by coverage, industry class and account size provided by MarketScout are below. 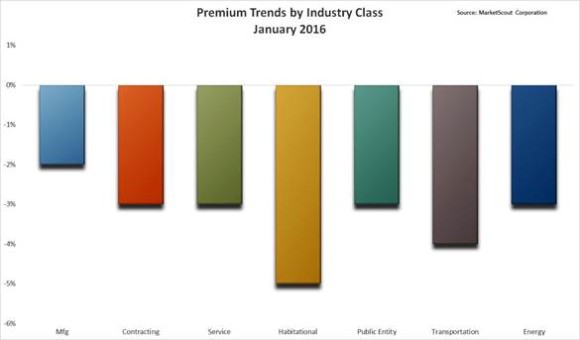 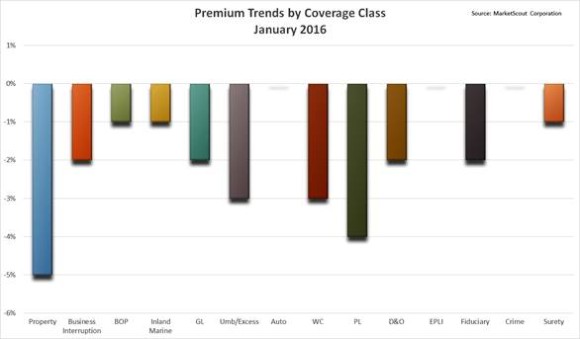 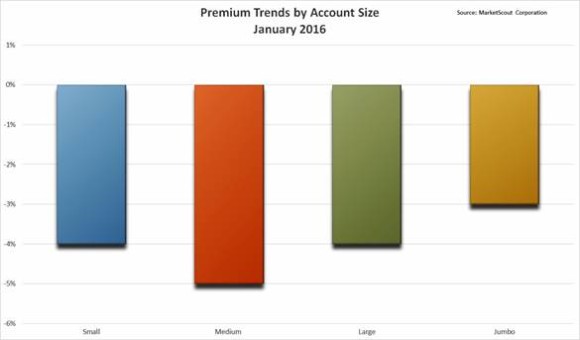