When agency consultants at Reagan Consulting hosted more than 150 industry leaders at a workshop on agent/broker mergers and acquisitions (M&A) recently, the mood was upbeat, since brokers are enjoying their best combination of growth and profitability in nearly a decade.

There was even more reason for the upbeat mood. As Bobby Reagan, CEO, told the attendees, values being paid for insurance agencies and brokerage firms have “never been higher.”

Kevin Donoghue, managing director, Mystic Capital Advisors Group, calls 2015 a “rapid year” for deals, citing SNL Financial data that there were 309 deals in the insurance distribution sector in 2015, compared with 254 in 2014 and 161 in 2013. “Over the past three years, multiples have steadily risen and with it, the number of deals,” Donoghue said.

There was plenty of activity in the agency and brokerage market in 2015, with, as usual, a handful of brokers very active nationally and internationally. The super-buyers included Hub International (37), AssuredPartners (31), Arthur J. Gallagher (26), Confie Seguros (15) and Brown & Brown (13) among others. NFP Corp., Integro, Marsh and McLennan Agency, Alliant and The Hilb Group also had a busy year.

Kevin Stipe, president of Reagan Consulting, noted that demand has been strong and private equity buyers have been extremely active — involved in more than four out of 10 transactions — and they are “most responsible for pushing acquisition multiples to record levels.”

Stipe sees the trend continuing in 2016. “With widespread buyer demand, there is nothing today to suggest that valuations will be going down any time soon,” he said.

Donoghue isn’t so sure multiples will keep rising. “I expect 2016 to be a busy year, but believe we are at peak pricing right now. Rising interest rates and the turmoil going on in the energy sector will likely have a drag effect on valuations,” he told Insurance Journal.

In December, Towers Watson & Co. and insurance broker Willis Group Holdings closed on their $18 billion merger of equals. The combined agency is named Willis Towers Watson and is domiciled in Ireland. Willis agreed in June to merge with Towers Watson to better compete with Marsh and Aon, which also have consulting operations. Towers Watson had to overcome opposition from proxy advisors to seal the deal.

QBE Insurance Group of Australia is selling its U.S. agency businesses to California-based Alliant Services for about $300 million and exiting the distribution business. The agencies being sold include Community Association Underwriters in Pennsylvania, Deep South Insurance Services of Texas, and SIU Managers in California. 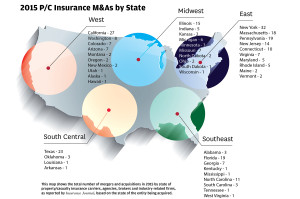 Marsh & McLennan Agency acquired Dallas-based MHBT, an agency with annual revenue of $76 million and 350 employees in five offices throughout Texas.