American International Group Inc., the insurer that’s been under pressure from activist investors, said it plans to cut 242 jobs at five locations in New York City.

The reductions will take place through Sept. 30, and include its Water Street headquarters, as well as Pine Street, Old Slip, 1 New York Plaza and Liberty Street offices, AIG said in a so-called WARN notice dated March 21 and filed with the New York Department of Labor.

Jon Diat, a spokesman, didn’t immediately respond to a request for comment.

Chief Executive Officer Peter Hancock, under pressure by activist investor Carl Icahn to shrink the company and improve profitability, has been reducing costs by eliminating jobs and shifting thousands of positions to less expensive locations outside of New York. He told investors in November that he planned to dismiss almost a quarter of the top 1,400 members of senior management, and told staff not to count on lifetime employment. He said about 2,000 jobs annually were being moved to low-cost centers.

Moving jobs has been a “very substantial shift in the way the company has provided services to create scale,” Hancock said in a November conference call. AIG has “improved controls and provides the platform for future automation of what were very manual processes that were decentralized and had a lot of redundancy,” he said.

AIG shares have fallen 13 percent this year, compared with the 0.6 percent advance of the Standard & Poor’s 500 Index. 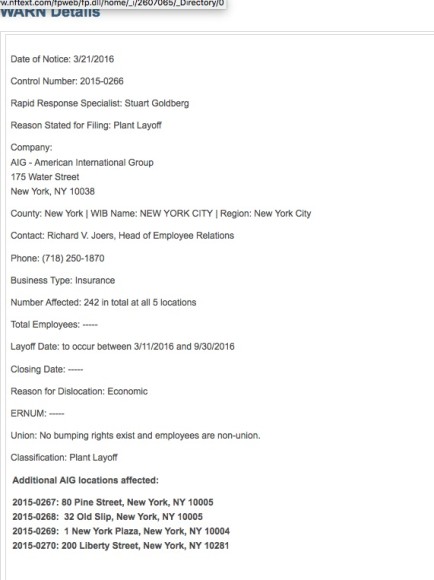