If you’re a conservative Republican, there’s a decent chance that you believe in climate change.

Compared with two years ago that is.

Don’t tell this to Rush Limbaugh or presidential hopeful Donald Trump. Although he seems to have warmed a tad to the idea of a changing climate lately, Trump has been known for poking fun at believers in myriad tweets, including one in 2012 stating: “The concept of global warming was created by and for the Chinese in order to make U.S. manufacturing non-competitive.”

A poll out this week from the Yale Program and Climate Change Communication states that conservative Republicans have experienced the largest shift in climate change believership of any political group with an increase of 19 percentage points over the past two years.

Forty-seven percent of conservative Republicans think global warming is happening, up from 28 percent two years ago, the poll shows.

“More American voters understand that global warming is real, including conservative Republicans. The COP21 agreement (the carbon reduction agreement last year in Paris), the unusually warm winter, and media coverage have likely contributed to growing public awareness,” lead-researcher on the poll Anthony Leiserowitz, a Yale University professor, said in a statement. “Our studies also find that Pope Francis, with his call for climate action, has had an impact on the American climate change conversation.”

On the opposite side of the spectrum, nearly all liberal Democrats (95 percent) think global warming is happening, the poll shows. 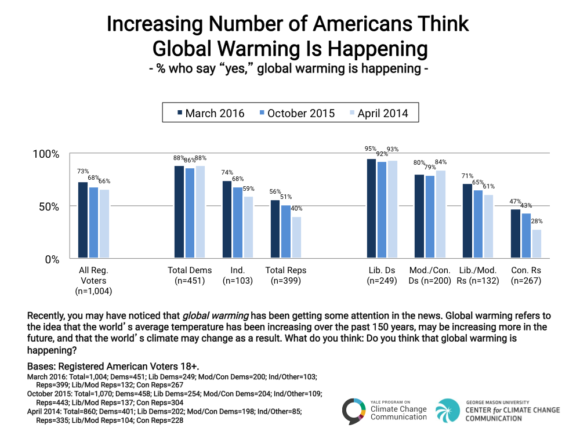 Could this mean that feelings on climate change will impact the upcoming election?

An editorial report on the U.K. news website Independent addresses a Danish proposal for a red meat tax.

The Danish Council of Ethics wants food to be taxed in proportion to its impact on climate change.

So that would put a greater premium on cattle, for example, which are responsible for an estimated 10 percent of all global greenhouse emissions, with other meats to follow, the report states.

If nothing else the proposal is a reminder that “climate change remains the greatest long-term threat to human prosperity and security – and we need policies that take it seriously,” the report states.

Want a fun read on the impact of livestock on climate change? Check out the report embedded below.

Twelve major corporations based or operating in the U.S. are voicing strong support for the Paris agreement.

“The Paris Agreement on climate change is a landmark achievement – it establishes an inclusive, pragmatic and, hopefully, durable framework for progressively strengthening efforts globally to address the causes and consequences of climate change. We recognize the rising environmental, social, economic, and security risks posed by climate change. As businesses concerned about the well-being of our investors, our customers, our communities and our planet, we are committed to working on our own and in partnership with governments to mobilize the technology, investment and innovation needed to transition to a sustainable low-carbon economy.”

The statement says the Paris agreement will help “facilitate and strengthen” the role of the private sector in the transition by: providing long-term direction; promoting transparency; addressing competitiveness; facilitating carbon.

Not that anyone here’s saying climate change is causing more, or fewer, hurricanes, but recent statistics compiled by the U.S. Census Bureau highlight just how many people and properties are exposed along America’s coastlines.

The North Atlantic hurricane season begins on June 1 and lasts through Nov. 30. The Census breakdown features factoids first by number and then an explanation of that number – similar to what you’ll see in the pages of Insurance Journal in the Declarations and Figures section.

185: The number of coastline counties along the Atlantic (129 counties) and Gulf of Mexico (56 counties) most threatened by Atlantic hurricanes.

59.2 million: The population as of July 1, 2015, of coastline counties stretching from Maine to Texas. In 2006 the population of these counties was 54.6 million, an increase of nearly 5 million in less than 10 years.

3,700: The number of miles of coastline from Maine to Texas.

3.3 million: The number of business establishments in 2013 in the coastal states stretching from Maine to Texas.

51.5: The percentage of U.S. homes that have an emergency evacuation kit. Roughly seven-in-10 households in the Miami and Tampa, Fla. metro areas had emergency supplies readily available in the event of an evacuation, while the Austin, Texas metro area had among the lowest rate of homes with an emergency preparedness kit.

18.3: The percentage of single-family homes that have a generator.

11: The number of years since the U.S. was struck by a major hurricane (Category 3 or higher). The last one was Hurricane Wilma in October 2005 over southwest Florida.

Ok deniers, have fun with that last fact in the comment section.

Large Insurers Embrace Digital Exchanges, Selling Their Own and Other Policies