The U.S. personal auto insurance industry saw net premiums written grow 5.1 percent in 2015 — a rate of growth that may not be repeated as rising loss ratios weaken both underwriting and operating results, according to an A.M. Best report.

But while personal automobile underwriting results have been generally stable in recent years and close to break-even, A.M. Best said the market has weakened into 2016 and that trend will continue in the months ahead.

A look at the combined ratio trends show the emerging trouble. In 2012, for example, the calendar-year combined ratio was 102. From 2013-2015, it was 101.5 and then 102.4 and 104.6, respectively. While underlying underwriting expense ratios improved a bit, loss ratios have risen, A.M. Best said, driven by rising loss frequency and severity.

A.M. Best asserts that higher rates, improving price segmentation and claim initiatives could address some of the near-term financial pressures on personal automobile insurance. But the ratings agency notes that other issues could have more longer-term impact on the sector.

Among the emerging issues of particular concern, according to A.M. Best: more technology innovation, the continued evolution of autonomous vehicles, the emergence of rideshare companies such as Uber and Lyft, and the potential market growth of “nontraditional competitors.”

Within this climate, State Farm emerged once again as the top personal auto carrier in terms of direct premiums written, with a number that came in at $36.5 billion in 2015 and an 18.7 percent market share. That’s about 2.7 percent higher than the previous year. Berkshire Hathaway placed second, with $22.8 billion in direct premiums written, 11.2 percent higher than in 2014.

Berkshire Hathaway saw the biggest gain among the top 10, A.M. Best said, thanks in part to the insurer’s continued push to boost its direct automobile business via GEICO. For the full top 10 ranking, see the chart below. 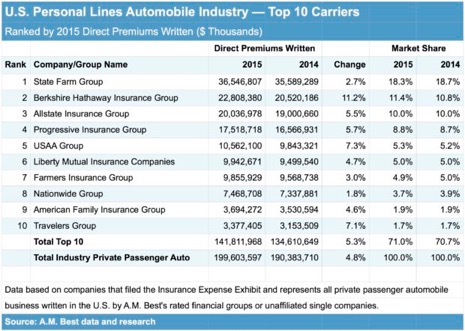