At a time when the nation’s workers’ compensation system is facing an aging workforce and a pending widespread labor shortage, federal policies on immigration and health insurance promise to exacerbate these challenges and contribute to causing far more claims and higher costs in the years ahead, according to a long-time workers’ compensation economist and researcher.

Workers’ compensation claims could double, and overall costs could balloon 300 percent in a little more than a decade, by 2030 – without any increase in benefits to workers, according to a scenario painted by Dr. Richard Victor, a senior fellow with the Sedgwick Institute, a risk and benefits think tank.

He said in contrast to the recent period of stable claims frequency, various external forces could bring far more cases into the system, piling on top of the normal growth in medical and indemnity costs over the next decade.

Victor maintains his dire scenario could transpire because of a number of forces including an aging workforce, an emerging widespread labor shortage, a slowdown in immigration, and more of what should be health insurance cases shifted to workers’ compensation.

Victor, an economist who founded the Workers’ Compensation Research Institute (WCRI) in 1983 and served as director until 2016, returned to his WCRI stomping ground at its annual conference last week in Boston to ask what might happen if his or a similar dire scenario came true.

He expressed concern that the approaches to reforming workers’ compensation that have worked for the last 100 years may not be effective or achievable in the years ahead given the external nature of the forces coming to bear as well as the polarization of politics and ineffectiveness of government today.

“Is there a plausible scenario by which the systems get way out of balance and the reform process can’t bring it back into balance? Then what happens? It’s possible that the stakeholders at some point might say, ‘Can’t get there. Is there some alternative?'” he asked, continuing, “If the state governments can’t solve this problem, where do we put the responsibility for a system that compensates workers for workplace injuries?”

The answers to that inquiry and others could come in the book Victor is close to finishing.

In the meantime, there is his 2030 scenario to ponder.

Projecting current claims frequency trends out a dozen years to 2030, claims should actually be down to 73 percent of what they were in 2017, according to Victor. However, external factors will overtake that favorable frequency. 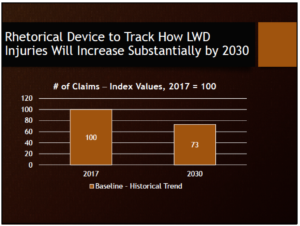 A long-predicted and prolonged labor shortage caused by Baby Boomers retiring will contribute to the reversal of the trend of falling injury rates.

“Demographers have been writing about this, in some ways acting like Paul Revere, ‘A labor shortage is coming’ for the last 20 years,” said Victor. “And they’ve always pointed out that a labor shortage like this will be a real challenge for economic growth in this country. You can’t grow if you don’t have enough people to do the work.”

Victor said that research indicates that while the older workforce will mean an increase in lost workdays and more injuries, the overall effect on workers’ compensation of workers getting older is actually not major, perhaps only a five percent increase.

According to Victor, this is a problem because in labor shortages, “employers relax their hiring standards” and hire workers they wouldn’t have been hired in a normal labor market, including workers who are less capable.

“You can read other surveys and interviews that have been done by various reporting organizations and you’ll see other euphemisms for, ‘We’re hiring people that we wouldn’t have otherwise hired.'”

Health and medical fields, in particular, stand to be hurt by the labor shortage, the research veteran noted. When providers have difficulty finding doctors, nurses and therapists, that leads to delays in medical care and return-to-work. This shortage also affects the workers’ compensation industry itself, which will have more vacant positions and less experienced hires.

The overall labor shortfall leads to more workers’ compensation claims. How many more? Victor cited one Massachusetts study done during the 1980s when that state’s workforce could not keep up with the fast economic growth. The study found 2.8 percent more indemnity claims per year over a five-year period, along with an increase in the duration of disabilities. Victor extrapolated this out to mean as much as 30 percent more claims in 10 to 12 years. But for his 2030 scenario, he reduced the effect to 20 percent, as he assumes employers will accelerate technologies to replace workers and believes that, eventually, there will just not be any people to hire.

Thus by 2030, the labor shortage will add 20 points to the 73 percent benchmark that reflects current frequency.

Economists have tended to view immigration as a mitigating factor in estimating the negative impact of the labor shortage. While they have been warning the labor shortage will make economic growth more difficult, Victor said they have typically concluded with, “But it’s not going to be that big of a problem because the U.S. is a very attractive place for people to immigrate to.”

But that was before the Trump Administration started changing federal immigration policy.

The fact is that in the past two decades, the growth in the U.S. workforce has come from immigrants and their children, not from native Americans, who have represented a declining share of the workforce for decades.

“[F]rom a strictly economic point of view,” he said, the U.S. “could not have picked a worse time to limit the flow of immigrants” into the country.

Even small reductions in immigration matter and can not only further tighten labor markets but also prolong the duration of the shortage, he said, adding that anti-immigration rhetoric can also discourage people to come to the country or convince them to leave if they feel they are not welcome.

“These immigration restrictions and the rhetoric and enforcement that surrounds them will lead the shortages to be deeper and longer. It’s not just legislation; the uncertainty, alone, reduces immigration,” he said. “So the anti-immigrant rhetoric that we hear from our elected officials, anti-immigrant acts of violence that we see on the news, unpredictable enforcement and unpredictable deportation processes all create uncertainty.”

One in six healthcare workers in the U.S. is foreign-born, including 27 percent of physicians and surgeons, 15 percent of registered nurses and 22 percent of home health aides. This trend has ramifications for the workers’ compensation system.

He suggested there may be a lesson in the politics in the United Kingdom, where since the Brexit vote to exit the European Union, immigration has dropped 30 percent and there has been a substantial fall-off — 96 percent fewer— in the number of nurses from other European countries registered to work in the UK. “And that’s just uncertainty,” Victor said.

Beyond the labor shortage being exacerbated by a likely drop in immigration, Victor also sees a shortage of people with adequate health insurance as a problem for workers’ compensation.

Whereas years ago health insurance deductibles were near $550 or $800, today it is not uncommon for them to hit $3,000 or $5,000, even $10,000. According to Victor, studies show that this new reality causes more workers to either go without or delay getting medical care for an injury or illness. When, however, they can no longer ignore their condition, he suggests many may claim it as a work-related condition and seek workers’ compensation services. He cited past Rand research indicating that workers with high deductible or coinsurance plans postponed care in 36 percent of cases and that the most common cases involved soft tissue injuries—the “bread and butter” of workers’ compensation.

“[T]he moment of truth comes when the box gets checked: work-related or not? And the calculus for some people is different when their deductible is $5,000 than when it’s $500. So, that’s case shifting,” he said.

This trend could be furthered by the growing number of American workers with no health insurance at all.

“[A]s millions of people unfortunately lose their health insurance as provisions of the Affordable Care Act get repealed or weakened, more of those workers will be saying, ‘I used to be able to get care. I can’t get care. I can’t afford it. Where will I get that care?'” Victor said.

He said that the number of workers who lose their insurance will grow as the Trump Administration and Congress end subsidies and weaken or repeal other aspects of the Affordable Care Act. He estimates that case-shifting from health insurance to workers’ compensation could have a major effect, ballooning workers’ compensation indemnity claims by as much as 35 percent by 2030.

“Those are workers who have gotten used to getting healthcare and all of a sudden they really can’t afford it. And so, they are highly motivated to think about, ‘How do I continue to get something I used to have?” Victor said.

Noting that in past decades, stakeholders from within the system managed to enact reforms that restored a sense of balance if employer costs got out of hand or injured workers’ benefits lagged. But Victor is concerned that the forces now threatening workers’ compensation are external, not internal, and require advocates outside of the system to restore balance but this may not be possible given today’s politics and the trouble government has solving problems.

“I think it’s tough because these are forces outside the system. Raising the maximum benefit, or putting limits on duration of benefits, that’s something within the normal workers comp process, but a labor shortage, high deductibles in commercial health insurance, I think there are fewer tools within that traditional process, within the state government, in general,” he said.

The effects of all these trends, including the labor shortage, an aging workforce, more case-shifting, growing cost-sharing, a larger uninsured population will introduce a doubling of what the number of injuries would have been had none of these things happened into a world where injury frequency has been dropping every year, Victor estimates.

Then he adds to those factors the growth in the average cost per claim that just happens normally because prices and wages go up, throws in the likely growing duration of disability, and accounts for a few other forces at play, to arrive at his scenario for 2030:

“You end up with a 300 percent increase in workers’ compensation costs without increasing benefits to injured workers.”