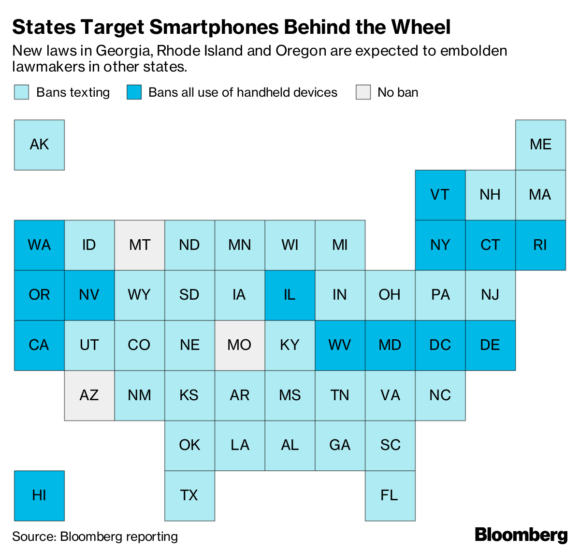 Like many diligent public servants, Georgia state Representative Ed Setzler enjoys crowing about a nice, tidy highway project. In a Sept. 8 Facebook video, the Republican appeared to be doing just that from behind the wheel of a car. This was less than three months after the state overwhelmingly passed a ban on handheld phone use in cars—legislation that Setzler loudly opposed.

The optics weren’t good. The video (since removed) triggered a din of outrage, mostly from parents whose children were killed by distracted drivers. Setzler declined to discuss the video.

As regulators, technology companies and even the most conscientious road warriors struggle with the universal urge to tap out a text or tally “likes” in slow-moving traffic, state and local policymakers are finally homing in on a strategy that works: deep and nuanced legislation, robust publicity campaigns and steep penalties—topped off with a hefty dose of grief for those already lost.

In Georgia, as with much of the U.S., traffic fatalities have spiked in recent years. Representative John Carson, who sponsored the Georgia legislation, whipped up enough votes with some simple math. Reducing the state’s traffic fatalities by 20 percent would save 260 lives a year, the Republican reasoned. “That’s a high-school class,” Carson said before a critical vote in March.

When Georgia Governor Nathan Deal, also a Republican, finally signed the bill into law July 1, he broke down and took a moment to gather himself. “This legislation is Georgia’s way of saying today is the day that we say ‘no more.'”

Rhode Island and Oregon passed similar hands-free mandates months earlier. Though federal accident tallies have yet to be released, there’s some evidence these laws are working. TrueMotion, a Massachusetts-based company that monitors mobile-phone use for insurance companies, said levels of distraction in Rhode Island and Georgia dropped by 19 percent in the month after each law took effect. Georgia, one of the worst offenders when it comes to smartphone use at the wheel, saw a 22 percent reduction in texting and app use during the first month of its law. 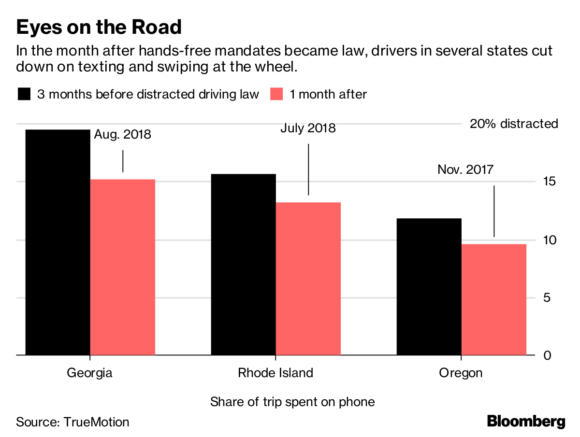 The results have been clear. Traffic fatalities in the state declined by 14 percent this year through September. “We’re cautiously optimistic,” said Captain Derick Durden, a George state trooper. “The law has teeth … and the compassion period is over; we’re going to be aggressively enforcing it now.”

The prospect of higher insurance rates has also helped buttress such laws. TrueMotion is now monitoring drivers for eight of the top 20 U.S. underwriters, including Nationwide Mutual Insurance and MetLife. Hanover Insurance Group, its newest client, is giving its teenage customers Amazon.com gift cards for staying off the phone while driving.

“The really interesting thing about all of this—there seems to be a strong correlation between the amount of media exposure distraction is getting and the drop in distraction,” said TrueMotion marketing director Matt Fiorentino. “Most people don’t recognize the danger, or they don’t recognize their own habits.”

Lasting progress, however, may be more difficult. Dig a little deeper into the statistics and the issue appears daunting. TrueMotion said the average American driver spends 17 percent of every trip talking, swiping or texting. Zendrive, another startup that monitors in-vehicle phone use, said the behavior is rapidly getting worse in almost every part of the U.S.

Still, Georgia’s numbers are emboldening lawmakers elsewhere. Stopdistractions.org is pushing hands-free legislation in 14 states at the moment, from Florida to Arizona and up to Minnesota. Executive Director Jennifer Smith estimates that the legislation stands a good chance in 10 of those states. “We’ve finally got all the kinks out,” she said. “And the public is finally at the point where they’re fed up. They know this is a massive problem.”

Meanwhile, Carson, the architect of the Georgia bill, has become a paragon of political dexterity in a tremendously polarized time. Fellow conservatives from about six states have reached out to him for tips on addressing distracted driving—and how to do it without losing support among right-leaning voters who tend to be skeptical of government oversight. “Lawmakers don’t really want to push regulations onto their constituents, period,” Carson said. “From the Republican side, it looks like big government. On the Democrat side, it looks like more police enforcement.”

What his fellow lawmakers have been slow to realize, however, is that most people want a crackdown on distracted driving. Safety is not a partisan issue, Carson tells them, nor is the irritation of waiting while the driver ahead of you bangs out a tweet. “The public is way out ahead on this,” he explained. “Every single person I talked to said something needs to be done about it.”

Ironically, the country’s least-distracted drivers are in Alaska, a state that still doesn’t have a law addressing hand-held phone use. Perhaps it’s the majestic scenery that keeps Alaskan eyes fixed out the windshield…of maybe the $10,000 fine for texting.