Homes in wildfire-prone areas around the U.S. could be built to better withstand blazes without increasing the cost of construction, according to a new report.

The research released Tuesday was sponsored in part by the insurance industry and marks the first attempt to quantify the expenses associated with building residences that meet stringent flame-resistant criteria. Few states have adopted such codes, often citing housing costs, but the new findings suggest fire-plagued communities could curb damage and save lives with minimal effect on home buyers.

“It’s a proven method,” Kelly Pohl, a research and policy analyst at the Montana-based wildfire policy consulting firm Headwaters Economics, who co-authored the report with the Insurance Institute for Business & Home Safety on the report. “We now know that it’s also a cost-effective method.”

The findings come days after a sweeping report from scientists for 13 federal agencies, who say that climate change will cause more devastating, costly and deadly fires, and that communities haven’t done enough to prepare. Insurers, safety advocates and disaster policy experts have urged state and local governments to toughen building codes — a move that’s often opposed by home builders over concerns it will increase housing costs, putting them out of reach of more potential buyers.

Home that comply with wildfire code are 2% less expensive than traditional construction.

The new research suggests that at least when it comes to wildfires, those concerns may be overblown.

The report looked at a typical three-bedroom, 2,500-square-foot, single-story home constructed last year in Park County, Montana, an area at risk for wildfires. The authors compared two ways of constructing that home: One using standard techniques and materials, and the other conforming to the International Wildland-Urban Interface Code, set by the nonprofit International Code Council in Washington.

They found that adding a fire-resistant roof, vents and gutters on the home would increase material costs by $6,000, or about 27 percent. Fire-resistant doors and windows would also raise to the expenses by another $5,000.

But those additional costs would be offset by the use of fiber-cement siding, which is fire-resistant and less than half the price of more commonly used cedar-plank siding. Altogether, the authors found that building the home to comply with the model wildfire code would be 2 percent less expensive than traditional construction.

State and local government officials across the American West may not realize that fire-resistant building codes don’t raise housing prices, according to Stephen Quarles, chief wildfire scientist for the Insurance Institute for Business & Home Safety and the report’s co-author. He said he hopes the report persuades officials, as well as homeowners, to demand stricter construction practices.

Wildfire research “is still a very new science,” said Quarles. “This new report adds another layer of evidence that resilience is accessible and affordable.” 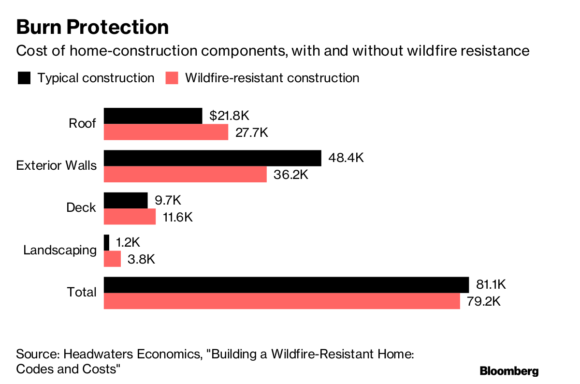 But he added the resistance to building codes in many rural communities is as much cultural as economic.

“There is, in some parts of the country, this desire not to be told how to build,” Quarles said. “It goes beyond how to build. It’s how to live your life.”

Steve Snezek, executive director of the Montana Building Industry Association, which represents home builders, said his members are constructing houses that are increasingly fire-resistant, even in the absence of codes requiring more stringent techniques.

“A lot of people that are building homes out in more rural areas are looking for a little bit more protection,” Snezek said in a phone interview. “The market is working.”

Still, Snezek agreed that people in Montana weren’t keen to have the government tell them what to do. “There’s certainly a live-and-let-live culture.”

Claims Frequency Up for 2021, but Workers’ Comp Profitability ‘Unprecedented’