The distracted driving report by Zendrive, a traffic-data startup, makes it clearer and clearer each year that millions of Americans can’t stop themselves from talking, texting and livestreaming—yes, even using FaceTime—while driving. The results have been increasingly unsettling, showing that drivers in the U.S. are becoming more likely to use their smartphones more often.

This year, in a new twist, the company took the usage data from the tens of millions of cellphones it monitors and combined it with a self-assessment to the same drivers: Are you good at focusing on the road? The worrying verdict: American drivers have no idea how often they use their phones. The most distracted drivers in Zendrive’s sample gave themselves high marks for paying attention, with roughly one-third of the worst multi-taskers considering themselves “extremely safe.”

Fully autonomous vehicles that will safely subtract humans, leaving us free to focus on our screens, remain a long way out. The laws that prohibit drivers from touching smartphones are patchy and difficult to enforce. In the meantime, safety regulators, insurance companies and technologists have turned to an incremental fix for distraction: monitoring the driver, not the vehicle. The hope is that awareness may just succeed where policies and penalties haven’t.

Zendrive now has its monitoring technology on 60 million phones, roughly one of every four U.S. drivers. TrueMotion, a rival, is tracking distraction and other driving metrics for eight of the top 20 U.S. auto insurers, and an additional 30,000 drivers have voluntarily downloaded the TrueMotion system in attempt to self-regulate tendencies to talk and text at the wheel.

A third provider, Cambridge Mobile Telematics, monitors distracted driving for 35 insurers, including State Farm. In addition to siphoning smartphone data, Cambridge Mobile uses a Fig Newton-sized puck that provides even better metrics on vehicle performance and phone use. This quarter, the company shipped 8 million of the devices.

The reason for all this data is that at least one in five U.S. auto insurance policies now offers a potential discount if the customer consents to a vehicle monitor. Taken together, there’s a very complete picture of the dangerous driving that has led to the 15 percent surge in annual U.S. traffic fatalities from 2014 to 2016.

Early indicators suggest simple awareness may be an effective antidote. Cambridge Mobile said distraction levels drop by 35 percent among participants who check their data regularly. “Just seeing the results helps,” said Ryan McMahon, vice president of marketing. “It’s almost like going into a restaurant and being able to see calories on a menu.”

ConnectedTravel, an app maker, is now rewarding tens of thousands of drivers in Las Vegas and San Diego for driving as they did before cellphones. “Nobody believes you can change peoples’ behaviors—that’s a common view in the industry,” said CEO Bryan Biniak. “But when you start to create awareness, it’s impactful.”

Early trials among those using the ConnectedTravel app show a 40 percent reduction in phone use; four out of five participants check their driving metrics daily. “We just provide you with stats, just like fantasy sports or anything else,” Biniak said.

The early results point to a market triumph over bad behavior that lawmakers, police and advocacy groups have struggled to deter. Underwriters who are best able to identify distracted-driving tendencies are better able to price the accompanying risk. Most insurance companies still only offer discounts for good cell-phone behavior, but a growing number are using the findings to raise rates on serial tap-and-swipers. 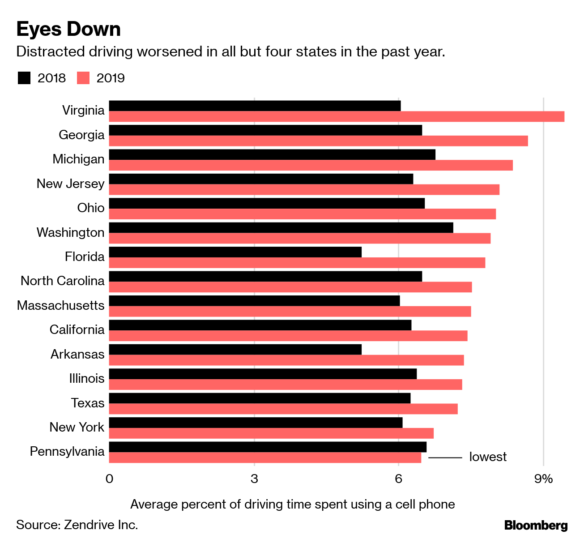 Distracted driving is more predictive of an eventual loss claim than virtually any other behavior, including speeding and braking. Those who tend to use cellphones at the wheel have 20 percent more insurance claims than others in the risk-pool, according to TrueMotion. “This is creating a pretty clear picture,” said Fiorentino.

Eventually, the margins of underwriters who best identify inattentive drivers will improve, he argued, while their worst customers will get nudged to less vigilant rivals, further muddying those risk pools. As a result, insurance companies of all sizes are hustling to roll out smartphone monitoring systems.

While the proliferation of robot chaperones is encouraging, the data they are collecting is grim. Distraction has increased in every part of the country, despite a rash of new laws intended to curb cellphone use at the wheel. Zendrive said distracted driving levels increased by 10 percent in the past year. Today, the company considers one in 12 drivers a phone addict—on their phones at least one-third of the time at the wheel—and that measure is climbing fast. At the current rate, one in five will fall into that category within three years.

“It’s a massive epidemic,” Zendrive’s Matus said. “And there is clearly a dissonance between what people believe the state of the world is, and what they’re doing.”

Distraction “is embedded in the culture of driving,” said Thomas Dingus, director of the Virginia Tech Transportation Institute. His recent research, which tracks eye patterns, shows drivers are distracted more than half of the time.

Curbing phone use is even a growing problem among self-driving startups. Most of the vehicles in robot-driven fleets still require human chaperones, at least for the time being. That means recruiting and training a safety workforce that has almost nothing to do, if all is going as planned; often, however, it doesn’t. Uber halted its autonomous-car program’s road testing a year ago after one of its vehicles struck and killed a pedestrian. The backup driver in that instance was watching The Voice on her mobile phone at the time.

Ford, which has backed self-driving startup Argo AI, has struggled with driving chaperones falling asleep. Alphabet’s Waymo, widely considered at the front of the self-driving pack, still has two humans in its vehicles much of the time. It turns out people aren’t wired for the kind of “passive vigilance” required to monitor a sentient vehicle. Federal safety regulators have sounded the warning on this, noting that cognitive limitations could be a dangerous stumbling block on the long path from analog driving to fully automated vehicles.

Little of this is surprising, even among the most inattentive drivers. The majority of Americans now consider distracted driving the top threat to safety on the road, far more dangerous than driving under the influence or speeding, according to a recent survey by Volvo. About one-third of respondents say they turn on “do not disturb” modes on their phones, and three out of four people surveyed would pay more for a vehicle with features designed to prevent distraction.

But it’s now becoming clear that distracted drivers seldom have a good sense of their own conduct. TrueMotion found that those using its monitoring technology reduce their distraction levels by 20 percent after receiving a push notification that identifies their phone use while driving. Those who don’t see their own records of distracted driving, however, use their phones 25 percent more often.

Late last week, Cambridge Mobile co-founder Hari Balakrishnan said in a phone interview that he was optimistic, in part, because the accident claims rate among the drivers on his platform is 47 percent lower than average. “I think I lot of people do, in fact, want to get better,” he said. “They just don’t have the granular information.”

The call ended abruptly when Balakrishnan—talking on a hands-free system—was rear-ended at a red light. The other driver got out of his car with cellphone in hand. “Thankfully it was just a nudge,” Balakrishnan said when he called back. “But honestly, you can’t make this up.”