One afternoon in late October 2017, hundreds of students from the elite Avenues private school in Manhattan were loaded onto buses, ready to head home. Suddenly, school principal Abby Brody got a disturbing smartphone alert.

The crime-tracking app Citizen buzzed with a bulletin, and then a live video, about a nearby traffic incident. It turned out to be a deadly terror attack that left eight people dead.

“I jumped in front of the buses and stopped them,” Brody said. “They were about to pull out and if I’d waited to get an update from the security team or the local police precinct, the kids would’ve been in the middle of it; they would’ve been driving right into it.”

Citizen uses a mix of humans and technology to monitor police scanners and sends out alerts to users regarding incidents occurring within about a one-mile radius of their smartphones. Users on site can upload photos and live videos of the scene. Originally called Vigilante, the app was banned from Apple’s App Store the day after launching in 2016 amid concern it would encourage citizens to take crimestopping into their own hands.

But after rebranding as Citizen in 2017 with an emphasis on safety and awareness, the app has exploded in popularity. It’s currently available in five cities: Los Angeles, Baltimore, Philadelphia, San Francisco and New York, where more than 1 million people have downloaded it. The app was ranked No. 18 in news app downloads across iOS and Google Play in the U.S. in May, according to analytics firm App Annie.

Citizen’s founder and Chief Executive Officer Andrew Frame has lofty goals for the mobile app to become a people-powered public safety net that will unite the country by encouraging people to help and protect each other. 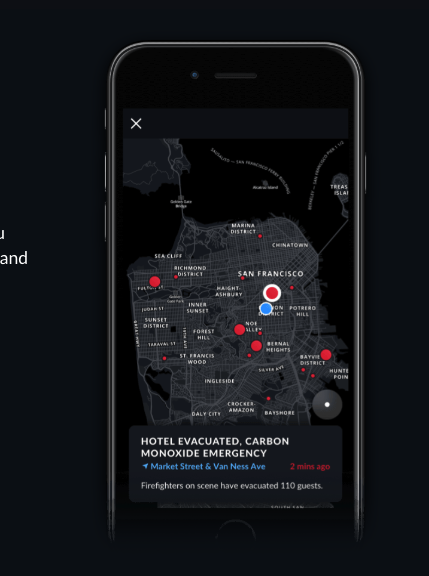 “Hyper local information is really important; it gives you situational awareness,” Frame said in an interview at Citizen’s New York headquarters. “We’re empowering people to make decisions about their safety in ways that have never been possible before. This fills a basic human need that we all have.”

But where some people feel empowered by knowing everything that’s going on around them, others see cause for neurosis and a risk for unfair profiling of neighbors.

New York City council member Justin Brannan first became aware of Citizen about a year ago. He downloaded the app and quickly became concerned about the “frenetic pace” of postings. “You’re in this constant state of anxiety because of what you’re seeing on the Citizen app, even though there’s no real credibility about the posts,” Brannan said.

Citizen automatically transcribes 911 calls but doesn’t give context on which ones are false alarms or unfounded alerts, he said. This means that if someone sets off fireworks and a neighbor calls 911 reporting gun fire, Citizen would publish that shots had been fired and never go back to retract the post or update it.

“That puts a certain vibe out there with people that they’ve got to be fearful for no reason,” Brannan said. Crime in New York City is at historic lows, yet Citizen blasts an “alternate reality of danger” by transcribing every 911 call without vetting those that might be over-exaggerated or just plain inaccurate, Brannan said.

Getting timely information on nearby car crashes, shootings, robberies or carbon monoxide leaks could help people steer clear of trouble or traffic jams, according to Citizen. The app sends out an average of 2 million notifications a day, but the intensity of the news varies widely. While the school principal’s story about the terrorist attack shows how the app can provide users with crucial information faster than police, many of the posts are more mundane. On an average Sunday afternoon in midtown Manhattan, Citizen’s reports showed police were investigating the theft of a taxi, a street brawl involving a naked man and a brash raccoon sunbathing on a balcony.

Still, there are success stories, like the five librarians who used the app to track down a missing elderly man on Staten Island in May. And in February, a person was awoken by a Citizen alert to a fire in his building, allowing him to evacuate before the firefighters came knocking. In a well-documented heroic rescue, Citizen users helped find a missing 4-year-old boy who had been picked up by a man on a crowded subway platform. Police later found out the man had a record of sexual abuse of a minor.

Such anecdotes help attract talent to Citizen, Frame said. The company’s head of design, Ed Kim, previously worked at Alphabet Inc.’s Google. Praveen Arichandran, the head of growth, used to lead a similar unit at Tesla Inc. and was formerly a product manager at Facebook Inc. Earlier this year, Citizen raised $27 million in a funding round led by 8VC. Other investors include Peter Thiel’s Founders Fund, Slow Ventures and Sequoia Capital. It was valued at $31 million in 2017, according to PitchBook.

For now, Citizen is a free app and it doesn’t run advertising. The company has plans to make money in the public safety space, but declined to provide further details.

When Citizen first launched under the name Vigilante, it used the tension between the community and police to attract users. The company claimed that trust between the public and police had eroded to all-time lows after mass protests that spread across America in the wake of the fatal shooting of Michael Brown in 2014, an unarmed black teenager, by a white police officer in Ferguson, Missouri. Police departments had begun implementing body cameras as a way of documenting police interactions with the public.

Vigilante wanted to put cameras in the hands of the people, encouraging users to live-stream from crime scenes. This mission ran afoul of law enforcement agencies. The New York Police Department said: “Crimes in progress should be handled by the NYPD and not a vigilante with a cell phone.”

Since then, the newly re-branded Citizen has made distinct changes to its platform and its mission. Peter Donald, the former NYPD assistant commissioner for communications who previously denounced the app as Vigilante, joined Citizen as its head of policy and communications.

Citizen no longer encourages users to interfere with active crime scenes or disrupt law enforcement. It has a 26-page editorial guide outlining the types of events it can broadcast and others that are banned. For example, Citizen won’t publish a suicide unless it places the public in danger, such as a a person threatening to jump from an apartment building above a busy street. It has also hired moderators to review all the photos and videos uploaded on the platform to ensure there are no graphic images and to try and filter out derogatory, racist or explicit comments. The company said it’s working to improve the monitoring process and screening for offensive content.

Columbia University Associate Professor Desmond Upton Patton said Citizen could potentially help connect and engage communities, but it needs to ensure it guards against bias and misinterpretation first. If Citizen was truly an “app for the people” it would allow users to correct any inaccurate postings to avoid presenting a skewed reality of crime, he said.

Patton, who is affiliated with Columbia’s Data Science Institute, said a lack of context around 911 calls could lead to “gross misinterpretations,” particularly within over-policed communities of color. “I’m concerned there isn’t a way for the system to be corrected by the people and for the people,” Patton said. “This is just going to lead toward a continued pathway of e-carceration and the over-criminalization of black and brown communities.”