There were 755,436 people working in financial activities in the New York metropolitan area last year, more than twice as many as in the next-biggest area for such jobs, metro Los Angeles. But this amounted to just 8% of New York-area jobs. There are other metropolitan areas where finance makes up a much larger share of employment than that. 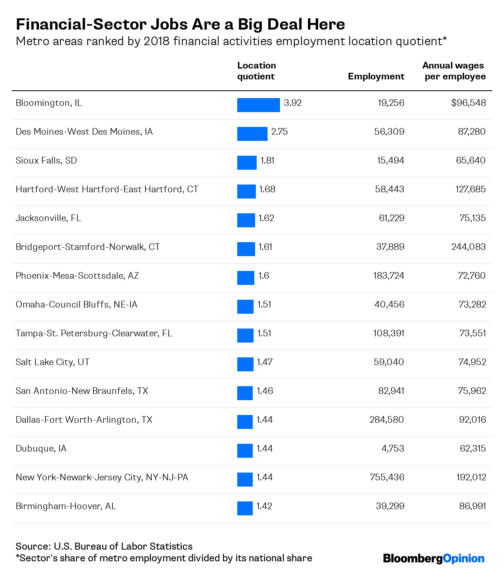 What the location quotient numbers in the above chart mean, basically, is that in Bloomington, you’re almost four times as likely to encounter people who work in finance as in the country as a whole, and more than 2 1/2 times as likely to encounter them as in the nation’s financial capital. Which makes sense, given that the small Illinois city (2018 metro area population: 188,597) is the home base of insurance giant State Farm; Country Financial, another large insurance and financial group, is also headquartered there. A whopping 22% of the area’s jobs are in financial activities (nationwide, the percentage is 5.6%).

Big insurers explain a lot about these rankings: There’s Principal Financial Group Inc. in Des Moines (along with 80 other insurance and financial services companies); the Hartford Financial Services Group Inc., Cigna Corp. and Aetna (since late last year a subsidiary of CVS Health Corp.) in and around Hartford; Mutual of Omaha in Omaha; USAA in San Antonio. In Sioux Falls, the specialty is credit cards — Citibank famously moved its card operations to the city in 1981 to take advantage of new South Dakota laws that allowed it to charge higher interest rates, and both Citibank and Wells Fargo are now officially based there (their parent companies, Citigroup Inc. and Wells Fargo & Co., are not).

Just to round things out, Dubuque has the headquarters of Heartland Financial USA Inc., which owns community banks in 12 states; a Prudential Retirement call center; and a couple of local financial institutions. Birmingham is home to two sizable regional banks, Regions Financial Corp. and Banco Bilbao Vizcaya Argentaria SA subsidiary BBVA Compass. Oh, and New York has some financial institutions, too.

Financial activities as defined by the Bureau of Labor Statistics include real estate and rental and leasing, which doesn’t entirely square with what most of us think of as finance. But when I narrowed things down to finance and insurance, Des Moines and Sioux Falls disappeared from the statistics, as the BLS often suppresses local data “to protect the identity, or identifiable information, of cooperating employers.” And I hated the idea of leaving out Des Moines and Sioux Falls, as anyone would.

Still, it’s worth redoing the above exercise with a couple of narrower categories that accord better with the notion of high finance. Here are the 10 metropolitan areas with the highest employment location quotients for investment banking and securities dealing: 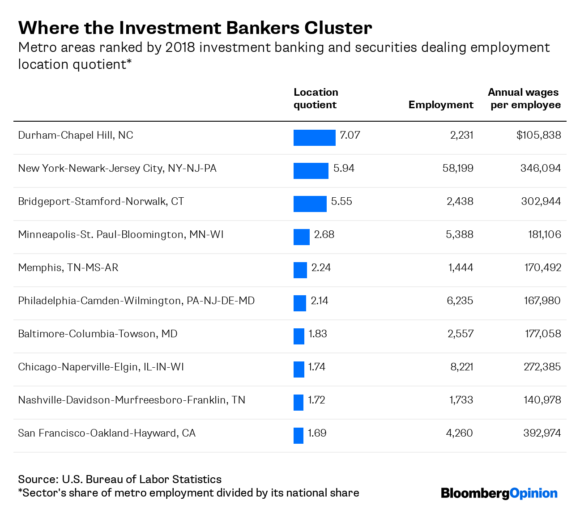 OK, Durham-Chapel Hill was a bit of a surprise at the top of this list; the main explanation seems to be that Credit Suisse Group NA’s Raleigh campus, the firm’s second-largest office in the Americas, is not in Raleigh but in nearby Durham County. Still, the location quotients for metro New York and neighboring Fairfield County stand out, too, and in absolute terms there are seven times as many investment banking jobs in the New York area as in No. 2 metro Chicago. In other words, the commanding heights of investment banking in the U.S. are mostly where everybody thinks they are — although the pay is highest in the San Francisco area, where the investment bankers who take tech companies public tend to work. 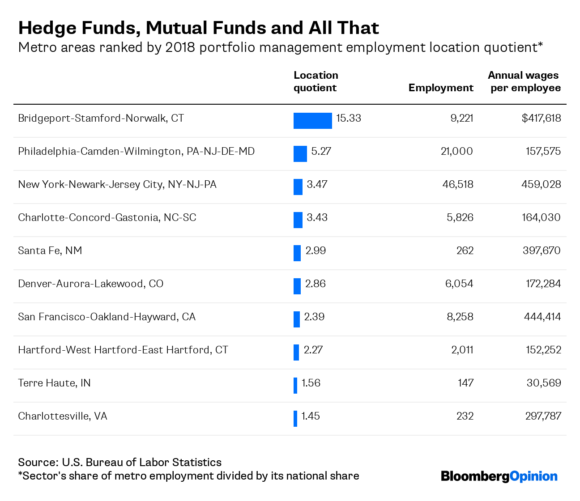 It’s obviously no shock to see Bridgeport-Stamford-Norwalk in the top spot, although that location quotient really is something. Santa Fe, the U.S. metropolitan area with the most-altitudinous central city, at 7,199 feet (2,194 meters), is a little less obvious. The most famous hedge fund in town (Prediction Company, started in 1991 by a couple of physicists affiliated with the Santa Fe Institute) shut down last year, but a number of other money managers and private equity funds are located there, presumably because their founders like mountain air and art. The Virginia college town of Charlottesville exerts a similar if damper appeal; my Bloomberg Opinion colleague Joe Nocera wrote about the doings of a hedge fund kingpin there in March.

There’s a clear wage divide on this list between places where money managers cluster, driving average pay above $300,000 a year, and those where the great majority of jobs are in administration, customer service and the like, such as metro Philadelphia, home to the largest mutual fund complex, Vanguard Group Inc. The Terre Haute metropolitan area clearly fits in the latter category, although it’s not clear where those 147 portfolio management employees work. Terre Haute-based First Financial Corp. is the area’s biggest financial services employer by far, but it’s chiefly a banking company.

The point here, other than just taking advantage of the fun data that the BLS releases every three months from the Quarterly Census of Employment and Wages, is that while the standard picture of a U.S. financial sector concentrated in and around New York isn’t all wrong, there are other places around the U.S. that depend even more on financial services jobs to pay the bills.

Justin Fox is a Bloomberg Opinion columnist covering business. He was the editorial director of Harvard Business Review and wrote for Time, Fortune and American Banker. He is the author of “The Myth of the Rational Market.”