The company that helped make driver safety monitoring ubiquitous among auto insurers is now offering a product that can write accident reports within minutes of a crash.

“What happens when you’re a claims adjuster is you spend a lot of time interviewing people to find out what happened,” said Ryan McMahon, CMT’s vice president of insurance and government affairs. “How fast were you going? What exact time did this happen? It usually takes awhile. This tool speeds up that process.”

Claims Studio also can be used to send an alert to CMT’s servers if it detects a crash. When an alert is signaled, customers who signed up for the service will receive a call from their insurer to find out if an emergency response is needed. 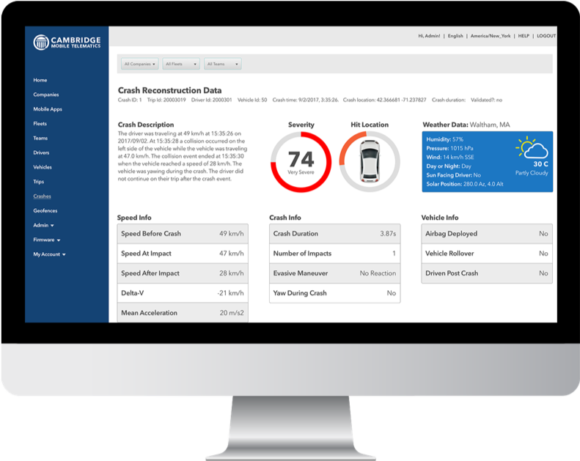 McMahon said one insurance carrier, Discovery Insure in South Africa, is already offering Claims Studio to its customers. Some of its U.S. customers have also tested the Claims Studio product in pilot projects. He said CMT has also intentionally crashed cars, under controlled conditions, to test the functionality.

Claims Studio uses four sensors — an accelerometer, global positioning system, gyroscope and a barometer — to detect when an impact occurs and reconstruct the crash event. Data is sent to CMT servers, which validate the initial data and assess the severity of the accident from the data.

The system produces claims reports that include a description of the crash, the duration, the location and number of impacts, acceleration, evasive maneuvers, weather conditions and the time of day.

Claims adjusters can use the data to produce a first notice of loss and get a head start on the investigation. He said normally claims adjusters must interview the insured to start adjusting a claim.

“This tool speeds up that process,” he said. “Instead of waiting for the insured, the information can be transmitted from the crash.”

He said the data also helps with subrogation by providing data that can show how the crash happened and who is responsible.

CMT, based in Cambridge, Mass., introduced mobile usage-based insurance to the auto insurance market in 2012. The telematics technology is now used in more than 50 active programs with insurers and other partners in 25 countries, the company said.