Speed cameras made their U.S. debut in 1986 in Galveston County, Texas. The Swiss-made devices, dubbed “PhotoCops” by the local company that lent them to police departments in exchange for a cut of the ticket revenue, seem to have been successful at reducing speeding. But law enforcement officials for the county and the Galveston suburb of La Marque decided after less than two years of experimentation that the cameras weren’t worth the bother, citing gripes from motorists and difficulties in getting violators to pay.

“If you got a letter in the mail a month after you drove down some highway, saying that you were going 68 and send $60, what would you do?” Galveston County Constable Paul Bess told the Los Angeles Times in 1987. “A lot paid, but a lot ignored it.”

This experience didn’t dissuade the wealthy Phoenix suburb of Paradise Valley from getting its own PhotoCops that year, and it has kept using traffic enforcement cameras ever since. So has New York City, which installed its first red-light cameras in 1992 and is now expanding its camera network to more than 2,000 devices.

Most of the country, though, has come to share Galveston County’s distrust. The National Highway Traffic Safety Administration has become a big fan of speed cameras — but the NHTSA doesn’t make traffic laws; state and local governments do. Only 153 jurisdictions in 17 states now use speed cameras, according to the Insurance Institute for Highway Safety, with almost a third of those in one state, Maryland. That is at least up from 111 in 2012, but the larger group of jurisdictions that use red-light cameras has shrunk from 556 in 2012 to 340 this year. Thirteen states have partially or completely outlawed the use of speed cameras, and eight don’t allow red-light cameras. In Texas, where it all began, the state legislature banned speed cameras in 2007 and red-light cameras last year.

Traffic fatalities are down in the U.S. too, but the trajectory of improvement has been sharper in countries with more widespread adoption of speed cameras.

In Europe, where traffic cameras were introduced in the 1960s by the Dutch company Gatso (now part of Sensys Gatso Group AB of Jönköping, Sweden) and began to be used on a large scale in the early 1990s, the experience has been much different. Speed cameras and red-light cameras are now ubiquitous and widely accepted — in the U.K., for example, “getting Gatsoed” has become part of the vocabulary, and surveys show that nearly two-thirds of adults think the cameras are a good idea. Not coincidentally, roads have also gotten much safer. Traffic fatalities are down in the U.S. too, but the trajectory of improvement has been sharper in countries with more widespread adoption of speed cameras. In the 1990s, the U.S. was in the middle of pack as far as road safety. Now it’s starting to look like an outlier, and not in a good way. 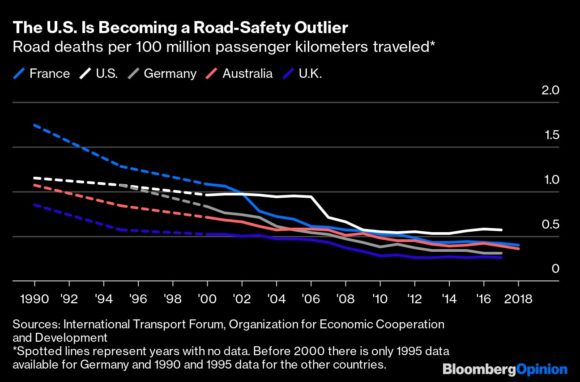 Lots of more carefully constructed studies point to similar conclusions. A 0 of the 28 available studies of the effect of speed cameras reported that every one found a reduction in accidents near the cameras, with declines in serious accidents in wider surrounding areas ranging from 17% to 58%, and a 2016 update found similar if somewhat smaller effects. With red-light cameras there’s at least one contrary indicator — they may lead to more rear-end collisions — but the preponderance of evidence appears to show them to be effective in reducing red-light running and the resulting serious accidents.

Any effort to eliminate racism in American policing must figure out what to do about traffic enforcement, which is the leading cause of interactions between police and the public, according to the Department of Justice. And, by law, it is almost entirely up to the officer whether to let the person go with a warning, give them a ticket, ask to search their vehicle, or escalate the situation even further. It is an interaction intentionally designed to let the officer do virtually whatever he or she wants, reflecting the inherent biases of our legal system.

There’s lots of evidence that law enforcement traffic stops disproportionately target Black motorists, and not a whole lot of counter-evidence (although there is some). Even after controlling for multiple possible confounding factors, the bias seems to persist. Perhaps most tellingly, it is less apparent at night, when it’s harder to see what drivers look like. In 2016, South Carolina U.S. Senator Tim Scott, a conservative Black Republican not exactly known as a critic of law enforcement, described how earlier in his political career he had been pulled over seven times in a single year, usually for “nothing more than driving a new car in the wrong neighborhood or some other reason just as trivial.”

More-widespread use of speed and red-light cameras wouldn’t eliminate this practice, as there would still be lots of other reasons to pull over drivers. But it would surely reduce its incidence. It would also result in more consistent, fair and comprehensive enforcement of traffic laws.

It is this last consequence that seems to generate most of the political resistance to traffic cameras. A 2011 poll by the Insurance Institute for Highway Safety found big majorities in 14 cities with traffic cameras supporting their use, but this support is often tepid while the opposition can be quite vociferous. The most vocal opponents are often, as Streetsblog recently documented with regard to the New York City borough of Staten Island, people who’ve gotten lots of tickets. Since traffic laws are set by local and state officials usually chosen in low-turnout elections, a little vocal opposition can go a long way. To a remarkable extent, the rules surrounding traffic cameras in the U.S. are thus being determined by repeat lawbreakers.

To a remarkable extent, the rules surrounding traffic cameras in the U.S. are thus being determined by repeat lawbreakers.

People in law enforcement also seem less than enthusiastic about automated tickets. The loss of discretion is surely one reason — nobody likes seeing their decision-making powers taken away — but as the quote from the Galveston County constable near the beginning of this column indicates, there is also a sense that tickets-by-mail are less effective. The overwhelming statistical evidence on reduced accidents near speed cameras would seem to refute this, but there are admittedly some complications on the enforcement side, such as the fact that speed cameras can identify the car but not necessarily the person driving it. Still, a commitment to following through on enforcement may make a big difference. In New York City, it has gotten to be a sad tradition after fatal traffic accidents for the news media to report how many speeding or red-light citations the car owner had. In response, the city council this year upped the penalties for repeat violators to include possible impoundment of the vehicle. We’ll see how that goes.

Traffic cameras aren’t perfect. In Chicago, red-light cameras incorrectly ticketed thousands of motorists from 2007 to 2014, a Chicago Tribune investigation found — although the problems seemed to stem from poor oversight more than the technology per se. The rise of internet-connected digital cameras also raises legitimate concerns about whether traffic cameras are becoming tools of broader state surveillance. Still, it seems clear that, when used properly, they save lives.

In 1995, the U.S. and Germany had nearly identical road fatality rates. Now the U.S. rate is nearly twice as high. If we had instead kept pace with Germany, 17,000 fewer people would die on the country’s roads each year. And it’s not like the Germans never get to drive fast; they just tend to do it only where it’s permitted.

Top photo: LONDON, ENGLAND – APRIL 15: A general view of a CCTV camera in Camden on April 15, 2014 in London, England. Privacy campaigners have stated that Town halls in the UK have been using fixed and mobile CCTV cameras to impose parking and traffic fines on members of the public with more than £300M GBP raised from motorists over the past five years. (Photo by Dan Kitwood/Getty Images)