When the coronavirus pandemic shut down bars and concert halls in March, a new phenomenon was born: the vacation-rental nightclub.

Professional party promoters started scanning Airbnb, Vrbo and other short-term rental sites for mansions and luxury condos for hire. Tickets were going for $90 on Eventbrite and TikTok for soirees with bottle service and DJs.

“People were looking to escape from their own homes and came into our tiny neighborhood to party all day, every day,” says Kristen Robinson Doe, a resident of a quiet suburban Dallas neighborhood where a party pad was being rented out for more than $1,000 a night. The five-bedroom home, with a resort-style pool, hot tub, outdoor kitchen and mini-golf putting green, was booked back-to-back through the summer. Doe watched in disbelief as strangers streamed through the gates every weekend and danced until dawn, unmasked, inebriated — and in clear violation of social distancing protocols.

Host Compliance, which gathers data on short-term rental properties in more than 100 cities in the U.S., found a 250% spike in complaints from June to September, compared with the same period last year. Party promoters quickly figured out “they can rent short-term rentals, create one-night nightclubs and make a lot of money from it,” says Ulrik Binzer, chief executive officer of Host Compliance, which helps municipalities navigate home-sharing rules. Selling tickets for house parties on Eventbrite and Instagram is “something we’ve never seen before,” says Binzer, who has worked in the industry for five years.

Airbnb and Expedia Group Inc.’s Vrbo have tried to crack down. Despite strict enforcement measures, the companies are struggling to curtail the events. If a listing is banned from Airbnb it can often still be available on Vrbo and other sites, and vice versa. If a host — or guest — is blacklisted, he or she may rent another property under another name. Some professional party organizers even tell attendees to meet at a public location and ferry them to private homes so the address is never published online. Within half an hour, an empty house on a residential street can turn into a full-blown discotheque.

The spike in rental revelries comes at a bad time for Airbnb in particular. The San Francisco-based startup is planning to go public in December and hopes to raise as much as $3 billion, according to people familiar with its plans. Airbnb had originally intended to list earlier this year but the project was jeopardized after the coronavirus shut down global travel and reservations plummeted. Recently the company has seen bookings return as people seek refuge in rural areas outside of Covid hot spots and settle down for longer stays, taking advantage of flexible work options. The rebound in Airbnb’s fortunes helped get the IPO back on track. But headlines involving police, forbidden parties and a deadly disease aren’t the image the company wanted to project.

“Reputation issues can spook people, from investors to the banks underwriting the deal,” says Maurice Blanco, partner and co-head of Davis Polk & Wardwell LLP’s global Capital Markets Group. “Investment banks are concerned about being associated with a company that raises red flags.”

Party houses were around before Covid-19. They drew national attention last year after a fatal shooting on Halloween at an Airbnb in Orinda, California, left five people dead. That prompted Airbnb to ban party houses and boost efforts to combat abusive host and guest behavior. “We must do better, and we will. This is unacceptable,” Chief Executive Officer and co-founder Brian Chesky tweeted at the time.

Airbnb rolled out new safety policies and risk-detection technology to hunt down nuisance listings. It removed rule violators from the site and launched a “dedicated party house” rapid response team and a complaint hotline for neighbors.

Vrbo also has a “no tolerance” policy and a group tasked with ferreting out the guests who throw unauthorized parties and the homeowners who knowingly allow them. “There have been rare occasions of someone abusing the platform and we remain committed to helping our partners protect their properties with education on how to prevent bad actors from renting,” a spokesman for Vrbo said.

But a summer of coronavirus restrictions in cities has proven a challenge for enforcement. 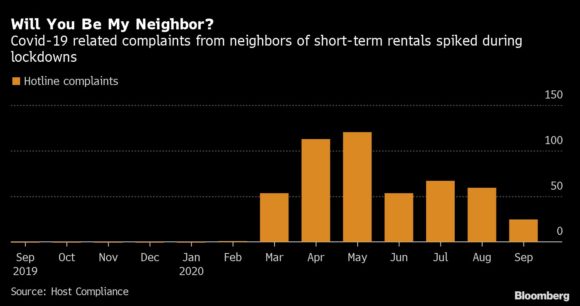 Police across the country began fielding calls early in the season about suburban party-goers terrorizing neighborhoods. Complaints included drunk revelers urinating off balconies, setting hillsides alight with fireworks and even spitting at neighbors, claiming they had Covid-19. The Los Angeles Police Department, Hollywood Division, had a 60% increase in radio calls related to party houses this summer compared to last, according to Captain Steven Lurie.

Every Thursday, Friday and Saturday night, the division allocates four officers to police party houses. “It’s not just an issue of public disturbance; we can’t allow them to become superspreader events,” he said.

In response to a spike in complaints, Airbnb bolstered its party-house policy in August, capping occupancy at 16. It also expanded prohibitions on people under 25 from making one-night reservations in the area in which they live. Airbnb uses an automated system to flag potentially problematic reservations for manual review and as a result has been able to identify and proactively cancel almost 9,000 “high-risk reservations” in the U.S. and Canada. Separately, a team of 60 Airbnb agents trained specifically on party house take-downs have suspended more than 380 listings since August, according to Airbnb spokesman Ben Breit.

The Dallas party house was one of them. It had already been blacklisted from Airbnb in January, after racking up complaints on the neighbor hotline, Breit says. Before the suspension was over, the house became available again on the site under the name of a new property manager: Kristin Gerst. “What I saw when Covid hit — and all of us short-term rental owners saw — was a plethora of low-class guests who disregard house rules,” says Gerst, who has managed short-term rentals in Dallas for three years and took over the property in February.

Prior to the pandemic, guests would leave Gerst “lovely thank you notes,” she says. Now they leave food on the floor, cigarette butts on tabletops and piles of trash. One guest even burned her house rules book — which specifically states no parties. When people lie about their intentions before a booking, hosts have few options for recourse, Gerst says.

One particularly egregious party at the Dallas listing was planned by a woman who said she wanted to reserve the house for her sister’s baby shower. In reality, she was hunting for a venue for the “Labor Day Mansion Party,” which was advertised on Eventbrite, offering bottle service and DJs. Neighbors saw people carrying turntables into the backyard and boxes of spirits delivered to the front door. Hundreds of people piled inside.

Once the party was in full swing, Gerst called the guest, who turned her phone off. She then asked Airbnb for help; the company canceled the reservation and permanently removed the listing from the platform. Gerst also tried the police, but it took five hours for them to arrive. “I’ve never felt so helpless,” she says, adding she’s now hiring a security company for backup.

While banned from Airbnb, the house was available on Vrbo until Oct. 6, when Bloomberg News inquired about the property. It remains on Expedia’s site though can’t be booked.

Over the past few years, Airbnb has been working to smooth its relationship with cities on short-term rental regulations but pandemic party houses have caused old tensions to flare again. In 19 of Airbnb’s top 25 cities -– by occupancy rate, as ranked by data firm AirDNA — city councils have either raised concerns about short-term rentals, enforced more stringent regulations due to Covid-19, or at least considered them, according to a review of city council documents. In August, Los Angeles Mayor Eric Garcetti authorized the city to shut off power, water and gas at properties hosting large gatherings. “The consequences of these large parties ripple throughout our entire community because the virus can quickly and easily spread,” he said at the time. On Aug. 19, the city cut the power to a Hollywood mansion rented by TikTok star Bryce Hall after he had held several parties there.

A few days later, Airbnb was sued by the Opera Tower condominium in Miami for breaking the city’s short-term rental laws and turning the building into a “de facto, unlicensed hotel.” In a lawsuit, the condo’s association says it’s been forced to hire off-duty police officers to assist with relentless late-night parties. “There have been numerous crimes committed at the property by the transient users, including robberies, assaults and allegations of a rape,” the lawsuit states. Two gunmen exchanged fire inside the building in June, riddling the third floor elevator lobby with bullet holes. The condo’s association didn’t respond to requests for comment.

Some residents have had enough. “There’s broken bottles, garbage lying around, people coming and going all drunk,” says David Ewing, who is moving out of the building after five years. “This isn’t a residence, it’s a nightclub,” Ewing says. “I can’t even compare when I first moved here to the hell it has descended into during the Covid crisis.”

In Palm Beach County Florida, and in New Jersey, contact tracers have tracked positive cases of Covid-19 back to forbidden short-term rental parties. “This is the kind of problem that has kept us from making progress,” says David Eisenman, director of the University of California, Los Angeles, Center for Public Health and Disasters. Holidays like Memorial Day and July 4th coincided with spikes of Covid-19, he says. “I expect we’ll see that again on Halloween.”

Airbnb hopes not. In early October, it banned one-night reservations over Halloween and said previously booked reservations would also be canceled at Airbnb’s expense. “In the midst of a generational crisis, all of us have a role to play in protecting public health and slowing the spread of Covid-19,” the company said earlier this month.

Airbnb’s efforts haven’t deterred party promoters like Davante Bell. In July, Bell planned the “100 Summers Mansion Party” in Glendora, California. The home was listed on Airbnb, Vrbo and vacationrenter.com, according to a city council report, and promoted on Eventbrite, offering pre-sale tickets, live DJs and bottle service. Around 200 people turned up. It took police more than an hour to kick them out. Bell walked away with a $1,900 fine — easily covered by the profits he made that night. He was also banned from ever using Airbnb again.

But Bell has big plans for Halloween: “Nightmare on King Bell Street Halloween Mansion Party” is already up on Eventbrite, offering bottle service, a $1,500 prize for best costume and tickets from $25 to $100. The party is bound to be a real life nightmare for the neighbors — and for whatever short-term rental platform he’s booked on.

–With assistance from Katie Roof.