The leading drugstores, drug distributors and health insurers lost about $22 billion in market value Tuesday after Amazon.com Inc. revealed plans to start selling prescription drugs to its Prime members in the U.S.

The long awaited move pushed Walgreens Boots Alliance Inc. and CVS Health Corp. down the most since March, while Rite Aid Corp. sank 17%.

The list of competitors for more traditional brick-and-mortar drug stores and distribution chains has been increasing as more consumers go online to buy their medicines, especially during the pandemic. 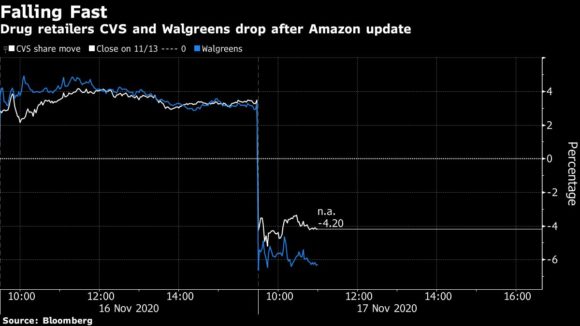 The shakeup follows more than two years of rumblings over the Internet giant’s plans following its roughly $1 billion purchase of PillPack in 2018. That same year Amazon also aligned itself with Berkshire Hathaway Inc., and JPMorgan Chase & Co. to form the Haven Healthcare venture to stem employer-health care spending, although turnover at the alliance has kept any major disruption to health-care companies at bay.

For drug stores, Amazon’s move is “net negative and will likely bring back conversations about the appropriate multiples despite recent positive news about the role of drug stores in coronavirus vaccine distribution,” Evercore ISI analyst Elizabeth Anderson said in a note. “This will likely create an overhang for the group until we determine the take up of Amazon Pharmacy.”

AmerisourceBergen Corp., Amazon and PillPack’s distributor, should benefit from the shift online, Anderson said. The market didn’t discriminate Tuesday, though, as AmerisourceBergen dropped as much as 3.7%. Other drug distributors slumped, with Cardinal Health Inc. down as much as 9% and McKesson Corp. declining 6.8%.

Cigna Corp. also fell. Amazon plans to use Cigna’s Inside Rx to administer Prime prescription savings benefits, according to a statement. Shares of the insurance company sank as much as 4.7%. The partnership was viewed as a “solid positive” for Cigna by Cantor analyst Steven Halper.

GoodRx Holdings Inc., plunged as much as 21%, the most ever for the company which started trading on the public markets in September. The digital prescription drug platform should collect some fees from an earlier partnership with Inside Rx, according to Cantor. GoodRx didn’t respond to an email seeking comment.