After seven straight years of increases, the number of traffic fatalities in Texas fell in 2018, the Insurance Council of Texas (ICT) reported.

Texas Department of Transportation data show that traffic fatalities dropped 4 percent from 3,720 in 2017 to 3,567 last year. 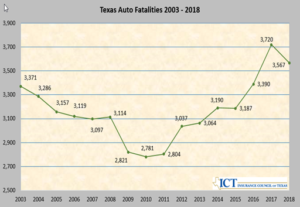 Traffic fatalities in Texas had risen 34 percent since 2010 before finally declining last year. Despite the decline in auto fatalities in 2018, the number of deaths remains nearly 25 percent higher than 2010 levels.

“Driving under the influence of alcohol and speeding continue to be the leading causes of fatal traffic crashes,” ICT spokesperson Mark Hanna in a media release. “Together, both of these factors make for a deadly combination.”

Hanna suggested that a new state law banning texting while driving may be one factor that helped reduce the number of traffic fatalities last year.

“Because of the tremendous loss of lives, many ICT member companies supported this legislation and the public awareness campaigns appear to have had an impact,” he said.

Experts in traffic safety say distracted driving laws save lives and enforcement of these laws can reverse the number of fatal traffic crashes each year.

State Sen. Judith Zaffarini of Laredo has introduced legislation this year, SB 43, that expands the prohibited activities of cell phone use in Texas.

The National Highway Traffic Safety Administration (NHTSA) says drunk-driving crashes have fallen by a third in the last three decades, but the number of people killed is still high. Every day, almost 30 people in the United States die in drunk-driving crashes — that’s one person every 48 minutes.

The NHTSA says ignoring speed limits remains a contributing factor in accidents with speeding accounting for 3 percent of all fatal crashes. In 2012, 42 percent of speeding drivers had blood alcohol concentrations of .08 grams per deciliter (BAC) or higher.

In every state, it’s illegal to drive with a BAC of .08 or higher. Every state has also adopted the minimum legal drinking age of 21. According to the NHTSA these minimum-drinking-age laws have saved more than 30,000 lives since 1975.