Just two weeks after the Demotech financial rating firm set off a firestorm of controversy by warning that it could soon downgrade as many as 17 Florida property insurers – then promised to hold off – the firm has now downgraded three significant carriers.

The actions could potentially add to the confusion and concern about the stability of the Florida insurance market and Demotech’s long-term role in it. The announcements also raised questions about whether the three downgrades are part of the 17 that the rating firm signaled were on the way.

Demotech President Joe Petrelli could not be reached for comment Monday. The financial stability rating change for United Property & Casualty Insurance Co., from “A Exceptional” to “M Moderate,” may come as little surprise. The insurer stopped writing in Florida in January and has undergone significant reorganization in recent months.

But Demotech also said the rating for Weston Property & Casualty Insurance Co. had been withdrawn. Until this week, the 11-year-old company, based in Coral Gables, had enjoyed an “A exceptional” stability rating.

Weston reported having 19,655 policies in force at the end of June. UPC does not report its policy numbers. UPC and Weston officials could not be reached for comment Monday.

Demotech late Monday also announced that FedNat Insurance Co.’s stability rating had been withdrawn as of Aug. 1. The withdrawal came three months after Demotech downgraded FedNat from an “A” rating to an “S Substantial.” The carrier, facing heavy losses in the last two years, is under a restructuring plan required by the Florida Office of Insurance Regulation.

Rating withdrawals have historically preceded insolvencies or rehabilitation for struggling carriers. The “M” rating may not be as severe, but it is not generally accepted by federal home loan buyers, known as Fannie Mae and Freddie Mac. That means the lesser mark could wreak havoc with policyholders who have mortgages and are insured by United.

After Demotech’s mid-July letter to the 17 carriers, warning of the potential downgrades, Florida regulators reacted with outrage and sprang into action. Last week, they devised a plan to allow Citizens Property Insurance Corp., the state-created insurer of last resort and now practically the largest property insurer in the state, to act as a reinsurer for carriers that become insolvent.

The novel cut-through endorsement idea would, at least temporarily, help solve the Fannie and Freddie issue, the OIR said last week, obviating the need for Demotech ratings. The corporations allow an exception to ratings if carriers’ claims are fully backed in case of financial troubles. After the Florida Insurance Guaranty Association pays its statutory limit on claims for a defunct carrier, Citizens would pay the rest, according to the plan.

The president of the Florida Association of Insurance Agents, which blasted Demotech in a blog post last week, could not be reached for comment this week about the latest ratings reports. FAIA and others in the industry have questioned if Demotech has outlived its usefulness in Florida. And regardless of whether the Citizens cut-through plan works out for the long term, some have asked if other financial rating firms can’t take on the task of measuring the strength and stability of more Florida carriers.

To help answer that, the Insurance Journal interviewed officials with the AM Best rating firm and with the Kroll Bond Rating Agency, both of which rate a number of Florida insurers. Both firms said they would welcome the opportunity to review more insurers in the Sunshine State: All carriers have to do is ask.

“The companies come to us and request a rating. That’s how the conversation starts,” said Jeff Mango, managing director at AM Best since 2004. “When we are engaged to do a rating, it gets turned over to the local team and the team has initial meetings with the companies.”

Peter Giacone, head of insurance ratings for KBRA, said the same: “We already rate several carriers in the Florida market and there is no reason we couldn’t rate more of them if they come to us and request that we do so.” 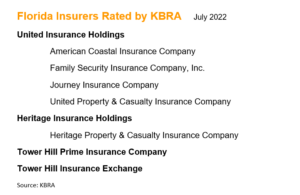 It may not be as simple as asking and receiving, though. Mango said his organization, which rates about 3,500 insurers around the world and 13 that are domiciled in Florida, performs a deep dive on insurers’ finances, looking at the risk of major losses, premiums versus capital ratios, surplus levels, and more.

He was asked why AM Best doesn’t already rate more Florida companies.

“We get that question a lot,” he said. “If you look at the population that is not rated by us, they tend to have more very high-leveraged premium. I think other agencies may have different standards than what we do.”

KBRA, in the Florida market since 2017 and which rates seven Florida insurers, said as much.

“KBRA’s insurance rating methodology is different from other agencies and employs rigorous quantitative analysis, robust stress testing and a detailed overlay of qualitative factors,” Giacone said in an email.

KBRA does not use a proprietary capital model but follows “a more holistic, transparent, and interactive process,” Giacone said. “Our ratings are forward-looking and account for differences in individual company risk profiles, business strategies, capital structures and operating environment. This leads to ratings which we believe are more accurate and stable over time.”

He added: “In order to best serve the markets and those who rely on credit ratings, KBRA rates to credit fundamentals, NOT headlines.”

Demotech’s Petrelli has pointed out that his firm was one of the only ones that stepped up in Florida in the 1990s, after Hurricane Andrew drove some insurers into insolvency and scared some major carriers away from the state.

“Why did no one else step forward in 1996 when contacted by the state of Florida to review take-out carriers?” Petrelli said. “They should be asked.”

He has said Demotech, too, puts companies’ finances under the microscope. Some insurance industry professionals have praised the firm for doing its job and for shining a light on the fact that many carriers in Florida’s distressed market are in deep trouble. Others have said that Demotech’s recent letter to carriers lumped healthy insurers with those in dire straits, and that the firm has not adhered to its own standards and methodology.

So, it’s not crystal clear, technically speaking, how AM Best and KBRA’s methodologies differ from Demotech’s, or if Florida insurers would fare any better under the firms’ scrutiny. AM Best has a 95-page book explaining its methodology. A condensed version is here.

If AM Best were asked to review more property insurers in Florida, it could take a minimum of eight weeks before a rating is published, Mango said.

“It really depends on the company,” Mango said. The reason why it stretches out sometimes is that a company may not be ready to pull all the information together. It may be sidetracked with other priorities.”

A common belief is that AM Best rates only the largest insurers, and some of those have eschewed the Florida market for years. But Mango said that’s something of a myth.

“If the question is, ‘Does AM Best only rate companies that are $50 million in surplus or higher, the answer is ‘no.” There’s no minimum,” he said. “We look at each company. They could have a small capital base or equity base, but if they write premium and have constraints in place and they underwrite prudently and don’t write an exorbitant amount of premium on their books, and have to rely on reinsurance carriers to step in, then, as long as the have the capital base and match it with a prudent premium base, then we can rate those companies.”

The question of who rates whom may end up being a moot one. Some in the industry have suggested that with Citizens providing the backstop for teetering insurers, the Fannie and Freddie problem is solved. Otherwise, the ratings are not needed.

The Citizens cut-through endorsement could also have a positive impact on carriers’ strength ratings, perhaps solving the problem that way, at least for some companies.

“My initial thought is that prior to assigning any level of FSR (financial stability rating), we would want to view the reinsurance cut-through endorsement,” Petrelli said in an email. “Second, although Citizens is a government-backed agency, we would also need to do a review of its ability to be a reinsurance company.”

After Ian Swamped His Office and Home, Florida Insurance Agent Picking Up the Pieces