Six of the top 10 most dangerous cities for pedestrians are in the Southeast and four of those are in Florida, according to a report from an advocacy group that works for better planning and safer transportation designs.

And the problem has only grown worse in recent years, Smart Growth America said in its recent report, “Dangerous by Design.” While driving subsided during the COVID-19 pandemic, nationwide, the number of pedestrians killed reached a new high in 2020, according to federal data. Since then, other data show that 7,485 people walking were killed in 2021 – the highest number in 40 years, the organization reported.

“This epidemic continues growing worse because our nation’s streets are dangerous by design, designed primarily to move cars quickly at the expense of keeping everyone safe,” the report noted.

Florida cities seems to be the epicenter for pedestrian accidents. The group found that the Daytona-Ormond Beach metro area held the dubious distinction of being number one in the country for deaths.

That was followed by the Tampa Bay area, ranked fourth in the nation; Jacksonville, 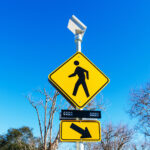 at sixth; and the Orlando area at eighth. Other U.S. cities included Memphis, at number three; Charleston, South Carolina, at fifth; Albuquerque, New Mexico, at second in the nation; and three California cities – Bakersfield, Stockton and Fresno, ranked at seven, nine and 10, respectively.

No metro areas are improving, Smart Growth America said. The fatality rate worsened for 2016 to 2020, compared to the rate for the previous five years.

The report did not address why Florida has so many dangerous spots. But it noted that lower-income areas of cities appear to have much higher rates of pedestrian fatalities, partly due to the fact that major arterial roads go through some of those areas, and pedestrians are forced to cross congested and high-speed traffic routes.

A report in the New York Times this week suggested that while other developed countries have taken major steps to make roads safer for walkers and bicyclists, the United States has not. The article said that Organization for Economic Cooperation and Development data shows that across the globe, deaths from road accidents have declined significantly in the last 30 years. In the U.S., though, the rate has fallen only slightly and has upticked in the last few years.

Some countries have made an effort to build in protected bicycle lanes, roundabouts at intersections and lower speed limits, and have seen more vehicle systems with automatic braking when pedestrians are detected nearby, the report noted.

In the United States, though, the emphasis has long been on speed, larger SUVs and trucks, and on moving traffic quickly, with little regard for walkers, runners, bikes or motorcycles, both reports said.

As many Floridians have complained, Florida has some of the highest auto insurance rates in the country. And pedestrian accidents are, in fact, one reason behind that, said Mark Friedlander, communications director for the Insurance Information Institute.

Other factors behind the rates include high accident frequency; higher repair expense; fraud schemes, including staged accidents; severe weather; and increased attorney involvement, which leads to more litigation, he said.

The Smart Growth report argued that policymakers can do better in addressing the safety issues.

“Too many agencies and decision makers with a hand in building our transportation system have been asleep at the switch, believing (or just hoping) that safety will improve while only making incremental changes to a deadly status quo,” the report concluded.