Thousands of Coloradans could face major cost increases for their flood insurance, just as many are trying to decide whether to rebuild or move on after the devastating September flooding.

More than 5,700 federally subsidized policies in Colorado could be hit with annual premium increases in the years ahead despite a federal law signed Friday that rolls back rate hikes for many homeowners whose premiums recently soared by thousands of dollars overnight.

“They made it very clear to our residents that if you chose to remain in the flood plain, they would see a significant increase in their insurance premiums,” said Victoria Simonsen, town administrator for Lyons, where more than 200 of the community’s 960 homes were damaged or destroyed. 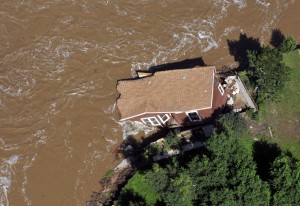 Nationwide, up to 1.1 million policies face increases, according to an Associated Press analysis of records from the Federal Emergency Management Agency. The government is trying to shrink a $24 billion shortfall in the National Flood Insurance Program created by long-running subsidies and a series of catastrophic storms.

In Colorado, 4,000 property owners could face increases of up to 18 percent annually on owner-occupied homes. Another 1,700 policies on second homes and businesses will face annual increases of 25 percent until they reach a rate based on the actual risk of flooding.

Measuring the impact in Colorado is difficult amid the uncertainty left behind by the September disaster, which destroyed 2,000 homes and damaged nearly 18,000 others along the Front Range and on the eastern plains. FEMA estimates the total damage at $2 billion and says flood insurance policies have paid $63.6 million in claims.

Charlie Corson, a retired bus driver who has lived in Lyons for more than 20 years, has already seen his flood insurance premium jump by a third, to nearly $2,000. But that’s because he and his wife had to increase their coverage to qualify for a low-interest loan they might need if they decide to rebuild.

Dan Matsch, another longtime Lyons resident, said his rates might actually go down. He discovered after the flood that his house stood on higher ground than anyone realized, even though it was heavily damaged, so he might qualify for a lower premium than the $1,200 a year he had been paying.

Lyons, a village of 2,000 in the foothills about 35 miles northwest of Denver, was devastated by the flooding. Two canyons funneled high water into a neighborhood of modest old houses and trailer homes. About 60 houses are considered substantially damaged by federal standards, meaning repairs would cost more than half the value of the home.

“People here are very, very distressed,” Simonsen said. Residents are trying to decide whether to rebuild or apply for a federally funded buyout that would pay them the pre-flood market value of their home and turn their property into open space.

But there’s no assurance enough money would be available for everyone who wants to sell, Simonsen said, and the owners wouldn’t get paid for a year or so.

Corson and his wife are wrestling with that decision. They are living in nearby Longmont for the time being.

“We’re hoping to rebuild but waiting to see if that’s financially feasible,” he said.

The Corsons’ small one-story house still stands empty, with mud and debris in the yard. Inside, narrow sheets of plywood laid across bare joists to form a precarious walkway. The water-damaged floor has been pulled up.

Overall, the impact of the congressionally mandated rate increases probably won’t be severe on Colorado’s real estate market, despite the higher costs that buyers will face, said Duane Duggan, a real estate agent in Boulder, which was also hit hard by the flood.

Duggan said one bit of certainty did emerge from the flood.

“In my whole 35-year career, we’ve been arguing about where the flood plain is, and now we know,” he said.