Days before a key vote in Colorado Legislature on ridesharing regulation a large insurer has come out with a poll that shows the majority of Coloradans believe rideshare companies should cover their drivers with commercial insurance.

No one has so far publicly categorized the poll as a preemptive strike against a bill that has already passed one side of Legislature, but the bill has the attention of the insurance industry in that it strikes at the heart of their argument that rideshare drivers should be under commercial policies at all times.

Results of a new poll by Allstate Insurance Co. show that the majority of Coloradans believe that transportation network companies should cover services offered by their drivers through commercial auto insurance at all times.

More than three-fourths of those polled say that TNCs should follow the same insurance coverage rules already in place for similar businesses like taxi and limousine companies. 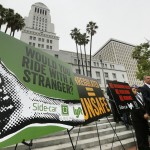 TNCs like Uber, Lyft and Sidecar partner via smartphone app with individual drivers who use their personal vehicles in a paid arrangement with passengers.

Colorado is just one among many states and cities considering laws and regulations to keep up with the growing ridesharing trend, which has taken a particularly strong hold in metropolitan areas, including San Francisco, where a young girl was killed on New Year’s Eve by a motorist on contract with ridesharing service Uber.

That driver was allegedly not in the process of providing a ride, but logged was in to the Uber app as available to offer a ride. Uber has denied liability in the incident and a lawsuit has been filed by the girl’s family.

The ridesharing trend has drawn concern from the insurance industry over a gap between when Uber’s reported $1 million commercial policy is in place and when a driver’s own personal insurance is providing coverage. TNCs have also drawn criticism from cab operators.

Uber recently announced it has a policy to cover this gap, and Lyft and Sidecar announced they are following suit. California Insurance Commissioner Dave Jones last week recommended that insurance should be required to cover the “app on, no match” period when rideshare drivers are between fares

The Allstate poll comes out two days before a key vote on Colorado Senate Bill 125.

SB 125 would allow TNCs to operate in Colorado with limited regulation by the Colorado Public Utility Commission.

In Colorado TNC’s like Uber and Lyft have been operating for some time, but by doing so they were in violation of state laws prohibiting the practice and CPUC had threatened to shut them down.

SB 125 passed through Senate and is now in the House. It’s scheduled for a hearing in the House Transportation and Energy Committee on Wednesday. A rally by TNC drivers in favor of the bill is scheduled on the steps of the capitol building, and a counter rally is schedule by taxi and limo drivers, according to reports.

The bill includes a livery exclusion, which states that when a driver is not providing a ride or on their way to pick up a ride, they are under their personal auto policies.

It appears to be the first and farthest progressing government proposal to draw such a line.

The Property Casualty Insurers Association of America and other insurer groups have opined that TNC drivers are providing a commercial service any time they are logged in to the app and looking for a ride. Lately PCI has argued that even when TNC drivers do not have their app on may they be engaging in risker behavior by being in areas where they are in proximity to a larger number of pedestrians and other vehicles so they can be where the rides are.

The one point insurer groups have made above others is that there exists a gap in coverage when a driver’s personal auto insurance is in play and when a TNCs commercial policy takes over, and that the personal policy should only cover drivers when using their vehicles for personal use.

SB 125 would eliminate that gap by placing coverage in the hands of personal auto policies if a driver has the app on and is waiting to be summoned for a ride. The commercial policy would kick in from the time when the driver and rider are matched until the driver finishes providing the ride.

What that means is that any other time the livery exclusion that’s written into most personal auto policies would not apply on the policy.

The bill is authored by Sen. Ted Harvey, R-Highlands Ranch.

Harvey did not return a call for comment for this article, but in a previous interview he said he stands against overregulation, and that the bill encourages developing businesses that serve the community to operate in Colorado.

The bill outlines regulations requiring basics such as background checks and vehicle maintenance, while the insurance requirement draws a “bright line” that states when personal auto insurance carriers’ coverage stops and when the TNC’s commercial policy begins, Harvey has said.

He said the language wasn’t broadened to mandate commercial coverage whenever a rideshare driver is logged into the app, as some have suggested, because that would create a situation in which both TNCs and the drivers are paying for coverage, he said.

“Instead of having the entirety of these business activities covered by TNC’s commercial insurance policy, a bill in the Colorado Legislature (SB 125) would require the TNC’s policy to be in effect only from the time the driver is en route to pick up a passenger through the end of the fare,” the poll states.

Allstate representatives who were handling the poll did not respond to a request for comment for this report.

The poll, which was conducted by calling 500 registered voters in Colorado between March 15 and 16, shows 56 percent of respondents want lawmakers to amend SB 125 so that drivers will be covered by commercial insurance while looking for customers, during pickup and through the end of the fare.

And only 31 percent want their lawmakers to vote for the current bill, the poll shows.

“It’s not surprising to me,” said Kelly Campbell, PCI’s vice president of state government relations, said of the poll. “I think it reflects what most people think.”

Campbell said proponents of the bill have been trying to cast light on TNCs more as technology providers that should be lauded for their innovation than transportation companies that should be regulated.

PCI has been lobbying Transportation and Energy Committee members to get them to look at what other states, such as California, are trying to do to further regulate TNCs and examine the insurance implications.

“We are trying to bring that to light with committee members,” Campbell said. “It also seems clear here that proponents in Colorado want to push this through so Colorado can be an example, so Colorado can be on the cutting edge of technology.”