People are driving less, and their vehicles have become more fuel efficient.

While those might be considered positive trends, a potential decline in gas-tax revenue is one reason the Oregon Department of Transportation says it is on track to spend about $500 million less on construction in 2020 than during the peak of the stimulus in 2009.

Five years ago, the department’s construction programs totaled about $800 million. That’s projected to plummet to $300 million in 2020, the agency says.

The decline would hit all aspects of Oregon transportation, including roads, rail, bridges, bicycle lanes and pedestrian-safety projects. 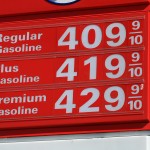 “As a result of a whole variety of trends coming together, we’re going to have a very limited budget going forward to really tackle the needs of the transportation system,” Travis Brouwer, the transportation department’s chief of staff, told The Oregonian.

Retiring Baby Boomers are one reason there will be less driving. Though the trend certainly pleases environmentalists, it concerns transportation officials because the gas tax remains a major source of transportation funding.

Moreover, gas sales have been flat or falling for about a decade, in part because vehicles are becoming more fuel-efficient. The gas tax provides just under half of the money in Oregon’s State Highway Fund, and the majority of the money in the federal Highway Trust Fund, of which Oregon receives a portion.

Other issues that hurt projected construction spending include lower federal funding, higher construction costs and millions of dollars tied up in paying off bonds for earlier projects.

Brouwer said more than 50 bridges in the state highway system are expected to be structurally deficient by 2020, and they would need repairs to keep them in service for the long term. The transportation department, however, expects to have money to fix only 36 bridges, Brouwer said.

He added that transportation department also needs to pave about 400 miles annually to keep state highways in proper condition. But starting this year, Oregon only has enough money to pay for 250 miles.