A tour bus that drifted off a Northern California interstate and crashed onto its roof, killing a 33-year-old man and injuring 30 others, was the vehicle’s second wreck in a day, authorities said.

The bus was en route from Los Angeles to Pasco, Wash., on Monday when it drifted off the right shoulder of Interstate 5 around 7:30 a.m. Sunday about 100 miles south of the Oregon border, said California Highway Patrol Officer Jeff Borgen.

The bus went down an embankment and overturned, coming to rest on its roof on an interstate frontage road.

The same bus struck a Denny’s restaurant overhang earlier Sunday in Red Bluff, about 50 miles south. No one was hurt, and the property damage was minor, Red Bluff police Sgt. Matt Hansen said. 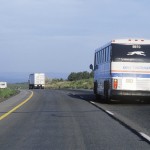 Investigators said evidence at both crash sites show that driver fatigue may have been a factor. They did not say whether drugs or alcohol may have been involved or whether any citations or charges were forthcoming.

The man who died in the later crash was from the Fresno-area city of Parlier, but his name was not released pending notification of his family.

Three people were in critical condition, including one who was flown by helicopter to Mercy Medical Center in Mount Shasta with severe head injuries, hospital spokeswoman Joyce Zwanziger told the Sacramento Bee.

Three people were in serious condition at the same hospital’s Redding location, where most of the patients were taken, spokeswoman Heather Nichols said.

Two dozen others who were injured were treated at hospitals for mostly minor injuries and released.

Jose Victor Garcilazo, 67, of Los Angeles, drove the bus, a 1996 Vanhool, and it was not clear Monday if he was injured.

The bus operator, Yellow Arrow LLC, is based in Othello, Washington. It has a current license and had no reported crashes in the past two years before Sunday, according to federal records. A company representative was not available for comment early Monday.

The hospital was working with the Salvation Army and the Red Cross to assist people who had been released, many of whom were staying at a hospitality house run by the medical center.

The crash was on the same freeway and about 90 miles away from a wreck in April involving another charter bus from Southern California, which collided with a FedEx tractor-trailer and killed 10 people. That bus was carrying high school students on a visit to Humboldt State University.