Darla Skolnekovich’s business ambitions are made of cardboard.

Reinforced, waterproof, fire-resistant cardboard – the type that, Skolnekovich says, could make a difference in disaster-ridden areas around the world.

The married Colorado Springs mother of two recently created the SadieShelter, a Lego-like hut named for her daughter that can quickly be constructed or taken down, that provides shelter and safety on the cheap. She recently established a crowdfunding website to build 200 of the structures with the intent of marketing them to nonprofit or human rights organizations tasked with offering emergency shelter in disaster situations.

“That’s our primary objective, to replace the crisis tent shelters that are currently distributed,” Skolnekovich said.

The idea came in 2010, during her first assignment of an engineering class at Colorado State University at Pueblo. She needed to simply make something _ anything _ using cardboard, a problem she solved with the concept of a primitive cardboard shelter. 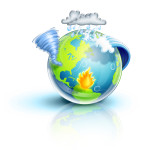 The concept evolved over the next four years, even as she transferred to the University of Colorado at Colorado Springs. Now she has a final prototype: an 8-foot by 8-foot shelter, standing 10 feet tall that can typically be put up in less than 10 minutes.

The walls are made of high-density, 1-inch thick honeycomb cardboard twice coated in liquids to ensure they are fire resistant, then sprayed to make them waterproof. Its crush rate is 800 pounds, she said, and the door can be locked from the outside or from the inside.

Along the way, she got help from a few organizations, including the Colorado Springs Technology Incubator, which helped refine her idea and find a purpose for the invention.

“I think the challenge is to try to pick the right sector to introduce it in, and go from there,” said Ric Denton, president and chief executive of the Colorado Springs Technology Incubator. “I think her challenge is kind of a marketing challenge.”

He said the shelter can be used for something as simple as an ice fishing hut, or as a temporary home to people in third-world countries whose homes have been destroyed in natural disasters. It could even be used on a military battlefield instead of typical soft-wall tents, which can be susceptible to shrapnel, he said.

Skolnekovich said she designed the huts to have double-wide walls, which can be filled with sand, gravel or soil or other anti-ballistic material. She tested the idea.

“No gun that we have … none of the projectiles or bullets make it through even the first set of walls,” she said.

Whether her idea evolves into something more than that – just an idea – remains to be seen.

An IndieGoGo crowdfunding campaign, which aims to help bankroll the construction of those 200 huts, ends Dec. 14.