Mayor Eric Garcetti has proposed spending billions of dollars to better protect Los Angeles against a devastating earthquake by strengthening thousands of vulnerable older buildings and fortifying the city’s water and communications systems.

The sweeping plan left unclear what the final cost would be and, in some cases, who would get the bill. A 126-page report released by the mayor recommends a host of seismic safeguards, including building a solar-powered Wi-Fi network that could keep people in touch in an emergency and developing alternative water sources for firefighters, including seawater and swimming pools.

“We cannot afford to be complacent,” the mayor said at City Hall on Monday, referring to the risk that another major earthquake could hit fault-laced Southern California. A 1994 quake in the city’s Northridge neighborhood killed at least 57 people and caused $25 billion in damage. 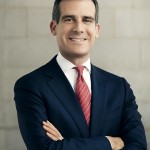 Scientists have long pondered the potential for the so-called “Big One,” a powerful earthquake on the San Andreas Fault that leaves Los Angeles and its suburbs shaking like a bowl of jelly. A strong quake on the big fault that knifes across California could leave the region in chaos, with cracked freeways, broken water and sewer pipes, hundreds of raging fires, homes without power, and scores dead, by some estimates.

The heart of Garcetti’s plan, to be submitted to the City Council, would require strengthening dangerous older structures – those constructed before 1980.

It would apply to so-called “soft-first-story” buildings, which are typically wood-framed and have a garage on the ground floor, and more than 1,400 concrete buildings, including some schools, apartments and warehouses, that are considered at risk of collapse in future earthquakes. Thousands of people would be in such vulnerable concrete buildings on a typical weekday.

It’s estimated that upgrades for “soft-first-story” structures could cost $60,000 to $130,000 per apartment building, though it’s uncertain how much of that bill would end up being rolled into tenant rents.

Owners would have up to 25 years for retrofits for concrete buildings, and work on “soft-first-story” structures would have to be completed within five years.

Beverly Kenworthy, executive director of the Los Angeles division of the California Apartment Association, called the proposal a good start. But the group that represents owners and developers has concerns about the five-year timetable and wants to make sure tax incentives and low-interest loans are part of the plan.

“Our concerns are not about the mandate, they really are about the ability to comply,” she said, especially with small businesses with limited access to capital.

San Francisco Mayor Ed Lee signed a city law last year requiring thousands of apartment buildings to be upgraded to better withstand earthquakes. Owners of about 3,000 multi-unit residential buildings sprinkled throughout the city are shouldering the cost of the seismic retrofits. Landlords can pass on those costs to tenants, although some may qualify for an exemption.

“We acknowledge that we cannot prevent 100 percent of the losses in an earthquake. What we are trying to do is prevent the catastrophic collapse of our economy by addressing the biggest vulnerabilities,” Lucy Jones, a federal seismologist who is advising the city, said in a statement.