A judge has rejected a California timber company’s attempt to undo a $47 million legal settlement for a massive 2007 wildfire.

Sierra Pacific Industries had accused federal prosecutors of engaging in misconduct. But according to the Sacramento Bee, a federal judge ruled on Friday that Sierra Pacific had not proved its claims and that most of the evidence it cited was known to its lawyers before the settlement was reached in 2012. 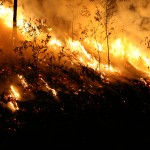 State and federal prosecutors and investigators concluded that Sierra Pacific was responsible for the Northern California wildfire, which consumed 102 square miles.

But a state court judge last year found that California officials lied and hid evidence, and the judge ordered the state to pay the company $30 million. The company cited the same evidence to re-open the federal case.