Pot may be legal in Colorado, but you can still be fired for using it.

The state Supreme Court ruled Monday that a medical marijuana patient who was fired after failing a drug test cannot get his job back. The case has big implications for employers and pot smokers in states that have legalized medical or recreational marijuana.

Colorado became the first state to legalize recreational pot in 2012. Though the case involves medical marijuana, the court’s decision could also affect how companies treat employees who use the drug recreationally.

Brandon Coats is a quadriplegic who was fired by Dish Network after failing a drug test in 2010. The company agreed that Coats wasn’t high on the job but said it has a zero-tolerance drug policy.

The court first agreed to take up the case in January. 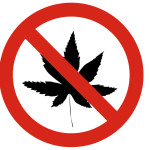 Coats argued that his pot smoking was allowed under a Colorado law intended to protect employees from being fired for legal activities off the clock. Coats didn’t use marijuana at work, and he wasn’t accused of being high on the job. But pot’s intoxicating chemical, THC, can stay in the system for weeks.

The company argued that because pot is illegal under federal law, medical marijuana isn’t covered by the state law.

The Colorado Constitution specifically states that employers don’t have to amend their policies to accommodate employees’ marijuana use.

In arguments last year, Dish attorney Meghan Martinez declared that it didn’t matter whether Coats was ever high on the job.

“This case need not be an endorsement or an indictment of medical marijuana” but a chance to set standards for employee conduct, Martinez said. “It’s a zero-tolerance policy. It doesn’t matter if he was impaired or not.”

Coats’ attorney, Michael Evans, asked the court to issue a narrow ruling that would apply to people like Coats: those in nonhazardous jobs who are not impaired at work and whose employers don’t have federal contracts that could be jeopardized.

Coats was paralyzed in a car crash as a teenager and has been a medical marijuana patient since 2009, when he discovered that pot helped calm violent muscle spasms. He was a telephone operator with Dish for three years before he failed a random drug test in 2010 and was fired. He said he told his supervisors in advance that he probably would fail the test.

A trial court judge and Colorado’s appeals court upheld his firing, saying pot can’t be considered lawful if it is outlawed at the federal level.