Billionaire Donald Sterling sued celebrity website TMZ and an ex-girlfriend over the recording of his off-color remarks that cost him ownership of the Los Angeles Clippers.

Sterling’s lawsuit filed last week in Los Angeles Superior Court accused TMZ and V. Stiviano of violating his privacy and causing damage on a “scale of unparalleled and unprecedented magnitude.”

The suit is the latest salvo in a legal soap opera that began in April 2014 after the recording caused a firestorm of criticism when the real estate baron was heard whining to Stiviano that she shouldn’t associate with black people.

The remarks led the NBA to ban him from the league and ultimately led Sterling’s estranged wife to sell the team owned by a family trust to former Microsoft CEO Steve Ballmer for a record $2 billion. 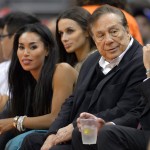 Shelly Sterling won court approval for the sale by showing her husband of six decades had dementia and couldn’t handle his business affairs.

Donald Sterling is suing his wife, the league and two doctors who examined him, claiming in federal court that they conspired to remove him from the team.

Despite litigation that put the couple at odds, they made nice during Shelly Sterling’s recent court case that forced Stiviano to relinquish a $1.8 million home and $800,000 in cash, gifts, a Ferrari and other luxury cars Donald Sterling lavished on the younger woman. A judge ruled the items belonged to Shelly Sterling as community property.

The recordings of Donald Sterling surfaced just weeks after Shelly Sterling sued Stiviano, claiming she was her husband’s mistress.

Stiviano has said Sterling consented to recordings she made on phones while they carried on a sexless relationship.

Donald Sterling, however, said in the lawsuit that the “illicit” recordings were secretly made and provided to TMZ by Stiviano “and/or her agents.”

Attorney Mac Nehoray, who represented Stiviano in the previous lawsuit, said Sterling doesn’t have a claim to privacy because his insensitive remarks were made in front of Stiviano’s sister.

“It’s ridiculous if he says he was damaged by it when he made $2 billion,” Nehoray said. “I think he’s just a litigious person. Unless he has something going on in the public eye, he can’t exist.”

The latest suit was lodged two days after Donald Sterling filed for divorce from his wife just weeks shy of their 60th anniversary.