Six of the remaining seven construction workers injured in the collapse of a six-story scaffold outside a New Mexico medical center were released from hospitals last week as investigators began work on trying to determine the cause of the accident.

One worker died after being taken to University of New Mexico Hospital after last week’s collapse and another remained hospitalized, authorities said.

The names of the workers haven’t been released.

New Mexico Occupational Safety and Health Administration officials were at the site in Rio Rancho to begin their investigation into why 21 feet of scaffolding buckled from the top down outside the Presbyterian Rust Medical Center. 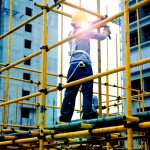 Patty Johnson, a spokeswoman for general contractor McCarthy Building Companies, said a subcontractor built the scaffold which employees were using to work on windows and other items.

“An accident like this is very uncommon for us,” said Bo Calbert, president of McCarthy Building Companies Southwest. “We will be evaluating all of the information provided in the official investigative report as well as findings from our own investigation to determine appropriate action.”

Clay Holderman, chief operating officer of Presbyterian’s Central Delivery System, said most of the injured workers were on the fifth floor when the scaffold collapsed.

“The site is now closed. The site will not be reopened until both OSHA and our own contractors and engineers have deemed the site safe,” he said.

Construction of Presbyterian Rust’s second patient tower began in June 2014. The first three floors of the $86 million tower have been scheduled to open to patients Nov. 2.