The small Oregon-based grocery-store chain Haggen this week sued Albertsons for more than $1 billion in damages, alleging the supermarket giant engaged in systematic efforts to eliminate it as a viable competitor in five states.

The lawsuit, filed in federal court in Delaware, accuses Albertsons of anti-competitive practices. Haggen, based in Bellingham, Washington, says those efforts forced it to lay off hundreds and close nearly a fifth of the stores it had acquired from Albertsons and Safeway last December.

Earlier this year, Haggen bought 146 Albertsons and Safeway stores, expanding from 18 stores in Oregon and Washington into new markets in California, Nevada and Arizona, The Seattle Times reported. Albertsons and Safeway were forced to jettison those stores to win approval by the Federal Trade Commission for their merger. 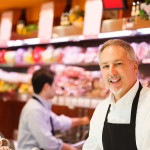 In a one-sentence emailed statement, Albertsons spokesman Brian Dowling said: “The allegations in the lawsuit are completely without merit.”

Tuesday’s lawsuit also comes months after Albertsons sued Haggen in July for fraud for failing to pay $41.1 million in inventory.

Haggen alleges that Albertsons acted “in a manner that was designed to (and did) hamstring Haggen’s ability to successfully operate the Stores after taking ownership.”

The lawsuit says Albertsons gave it misleading and incomplete retail-pricing data, causing it to unknowingly inflate prices, as well as illegally accessed Haggen’s confidential data to get the upper hand.

“Had Haggen known Albertsons’ true intentions, Haggen would never have purchased the Stores, nor would the FTC have permitted such a purchase,” according to Haggen’s lawsuit.