The first major product of General Motors Co.’s $500 million investment in Lyft Inc. was a short-term car-rental program. Last month, the companies began leasing Chevrolets in Chicago for up to eight weeks as part of the Express Drive program, allowing drivers who don’t own cars to make some extra cash by picking up and dropping off passengers.

As GM and Lyft prepare to expand the offering to at least three other U.S. cities soon, California regulators are mulling whether to block it from some of the country’s biggest car-booking markets. The transportation regulator in Lyft’s home state delayed a decision Thursday on a proposal that would set the minimum length of a lease for ride-hailing workers to four months.

Regulators are concerned that short-term leases enable Uber and Lyft’s fleet to act as taxi drivers without being subject to the same, longstanding rules. California wants to ensure the lines between ride-hailing and commercial drivers are clear and not give the technology upstarts an unfair advantage, said Evan Rawley, a business professor at Columbia University.

“What that is trying to do is make Uber and Lyft more like a car service, like a taxi,” Rawley said. “They’re basically just trying to eliminate loopholes that allow Uber and Lyft to have an unfair advantage.”

Uber Technologies Inc. said its auto financing program, called Xchange, would be unaffected by the rule. It already requires at least a four-month commitment from applicants. However, Uber’s short-term rental program with Enterprise Holdings Inc., which allows drivers to borrow a car for $210 a week, would be affected. While Uber said it’s not opposed to the overall proposal, the company sent an e-mail to drivers in California urging them to contact regulators and voice their opposition to limits on leasing. “These rules are not in drivers’ best interests,” Uber wrote in the e-mail. 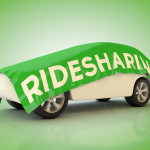 While California’s transportation regulator postponed a decision on rentals, it approved several new ride-hailing rules on Thursday. It will now require company logos be placed on the back of a vehicle, as well as the front; criminal background checks for drivers using services that primarily transport unaccompanied children; and more detailed disclosures about how fares are split in the newer carpooling services. It also approved a provision that serves as a setback for Lyft. Ride-hailing drivers will have to get annual car inspections by a certified mechanic. While Uber already requires these inspections, smaller rival Lyft currently doesn’t ask drivers to get certified inspections until they’ve been working for a year or have at least 50,000 miles on their odometer.

Lyft opposed the rules. “Ride-sharing has proven to be a flexible but reliable way for people to make ends meet. The proposed rules will hurt casual drivers who want to earn extra income but can’t afford to own a car,” Chelsea Wilson, a Lyft spokeswoman, wrote in an e-mail before the vote. “Eliminating the option for short-term leases will also have the unintended consequence of pushing people into lengthy, expensive contracts.”

GM testified before California regulators in opposition to the proposed rules. The automaker said it believes “that rented vehicles should be included in the definition of a ‘personal’ vehicle and is requesting the eligibility language be amended,” Laura Toole, a GM spokeswoman, wrote in an e-mail.

When Lyft and GM introduced Express Drive leases, the companies said they would soon roll out the service in Boston, Washington, and Baltimore, with the hope of eventually going national. The program lets drivers working actively on Lyft’s system return a rental whenever they want without financial penalty. Participants pay GM a share of their Lyft income and a per-mile fee for personal trips.

The California Public Utilities Commission voted 4-1 to approve the new rules. The delay on a leasing decision adds another item to the backlog, along with fingerprint background checks for all drivers, which the ride-hailing companies also oppose. “We are very happy that the commission endorsed forward-thinking products like uberPOOL and listened to Californians advocating for programs to allow more drivers to earn money on their own time,” Laura Zapata, an Uber spokeswoman, wrote in an e-mail.

The CPUC is a state agency led by five commissioners who regulate privately owned passenger transportation companies, along with natural-gas, electric, and telecommunications firms. California, the most populous U.S. state and a policy-making trendsetter, was the first to adopt changes later embraced by other states, including clean-air standards, legalization of medical marijuana, and paid family leave.

Before Thursday, the last set of ride-hailing rules were written three years ago. The commission hopes the next round will come more quickly. “We anticipate doing this fairly expeditiously,” Catherine Sandoval, a CPUC commissioner, said at the hearing.

—With David Welch and Olivia Zaleski