Tropical Storm Darby, which formed off the coast of Mexico on July 11, quickly reached hurricane status as it moved westward toward Hawaii finally reaching landfall on Monday, according to catastrophe modeling firm AIR Worldwide.

However, the hurricane weakened on its approach to Hawaii. Darby made landfall along the Ka’u coast of the Big Island as a tropical storm, near where Tropical Storm Iselle made landfall about two years ago.

“At the time, Iselle was the first tropical storm approaching from the east to hit the Big Island since an unnamed storm hit from that direction in 1958,” Scott Stransky, assistant vice president and principal scientist at AIR Worldwide, said in a statement. “And haggard though Darby was after its eastern approach, it achieved what none of the tropical cyclones in the central Pacific did last year: It made landfall – and became only the fifth landfalling tropical cyclone in Hawaii’s recorded history. The record shows no Hawaii landfalls as close together as Iselle’s and Darby’s.” 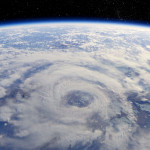 Darby was downgraded to a tropical depression as of 5 a.m. local time. There is a flash flood warning for Oahu that was in effect as of this morning and may be extended.

More than 1,000 households were without electricity on the Big Island over the weekend.