The family of an Arizona shooting range instructor who was accidentally killed by a 9-year-old girl with an Uzi has sued the business, alleging it should not have allowed a child to use the high-powered weapon.

The wrongful-death lawsuit seeks a jury trial in Mohave County Superior Court to determine damages for Charles Vacca’s widow and three children as well as his ex-wife and mother.

It claims the Nevada-based owners and operators of the Last Stop shooting range in White Hills, Arizona, were negligent in Vacca’s death on Aug. 25, 2014. The filing says an Uzi was not a safe or appropriate weapon to entrust to a young girl and caused her to lose control of it.

The range is located in northwestern Arizona, about 60 miles south of Las Vegas.

A woman who answered the phone Wednesday and didn’t disclose her name said the range was under new ownership and she didn’t know anything about the lawsuit. 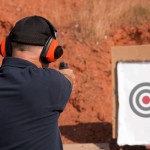 The shooting led to a debate over youngsters and guns, with many people wondering why parents would let a child handle a submachine gun. The girl’s parents have released statements expressing sympathy for Vacca’s family, but they have not said why they let the child shoot the Uzi.

The range’s owner previously said the parents had signed waivers saying they understood the rules and were standing nearby. Prosecutors declined to file charges.

Vacca instructed the girl on how to fire the gun, showed her a shooting stance and helped her fire a few rounds, according to police reports.

He then stepped back and let her hold the Uzi by herself. She fired the gun, and its recoil wrenched the Uzi upward, killing Vacca with a shot to the head. The 39-year-old was flown to a Las Vegas hospital, where he died.

An investigation by the Arizona Division of Occupational Safety and Health found no serious violations at the outdoor shooting range. But the agency recommended it have a safety officer, limit weapon selections for certain shooters and ensure shooters are comfortable with weapons before they are placed on automatic.